COLUMBUS, Ohio -- For Big Moe it's 28 and counting. One game away from becoming the first Division I team to complete an undefeated state title season, Cincinnati Moeller passed its toughest test of the season in a 57-47 state semifinal win over Pickerington Central on Friday at Value City Arena.

In a matchup of the top two teams in the final Associated Press state poll, Cincinnati Moeller survived a slow start against a Pickerington Central team that raced out of the gate. While Central would take control of the tempo early, getting out in transition and using its length and athleticism in the open floor, Moeller would not be deterred.

While Pickerington Central would extend its second half lead to 36-31 with 3:30 to go in the third, Moeller took the Tigers' toughest punch and responded with a haymaker.

Coming out and taking control of the game late in the third quarter, Moeller would rally around a trio of underclassmen. In the final two quarters, junior wing Jeremiah Davenport, sophomore guard Miles McBride and junior guard Sleepy Payton combined for 32 of Moeller's 35 points.

Scoring six-straight points, McBride and Davenport helped Moeller take its first lead of the game at 37-36 with 55 seconds to go in the third. While Pickerington Central would take a lead at the buzzer behind junior forward Juan Elmore, Moeller would not trail for long.

Nine seconds into the fourth quarter, McBride got a tough mid-range runner to fall, giving Moeller the lead at 39-38. From there on out, Moeller would not trail again.

While Payton would extend the lead to 41-38, Pickerington Central tied things at 41 moments later with a three from Jeremiah Francis. Knocking down a crucial three on Moeller's next possession, Payton gave Moeller the lead for good, as Pickerington Central would not tie or lead the rest of the way.

Trailing 47-45 with 3:37 to go, Pickerington Central would force a crucial stop on Moeller's next possession. However, Francis attempted to take three defenders on by himself, giving Moeller the ball back after a failed attempt at the rim.

Delivering a knockout blow on the next trip down the floor, Payton hit from the left wing, putting Moeller ahead 50-45 with 2:27 to go.

From there on out, Pickerington Central would not get any closer, as Moeller executed its way in the final minutes to advance to its first Division I state final since 2010.

Leading the way for Moeller was Davenport, who scored a game-high 17 points, including 11 in the second half alone. McBride added 13 points, 11 of which in the second half while Payton scored all 10 of his points after halftime, including eight in the fourth quarter alone. Senior forward Keegan McDowell also scored in double-figures, finishing with 10 points.

Shooting 15-of-25 in the second half, Moeller executed at an incredible rate in the fourth quarter, shooting 72.7 percent from the field and knocking down all three-point field goal attempts.

For Pickerington Central, Francis led the way with 16 points, but would only score three points after halftime, shooting 1-of-7 from the field. Manley added 12 points and seven rebounds, but would be held to just one rebound in the second half. Junior wing Adrian Nelson added 11 points, playing a very strong second half, making several clutch plays to keep the Tigers in it late.

With the win, Moeller advances to play the winner of Massillon Jackson and Lakewood St. Edward on Saturday at 8:30 p.m. If Moeller is to take on Jackson, it will be a rematch of the 2010 state final in which Jackson took down the Crusaders. 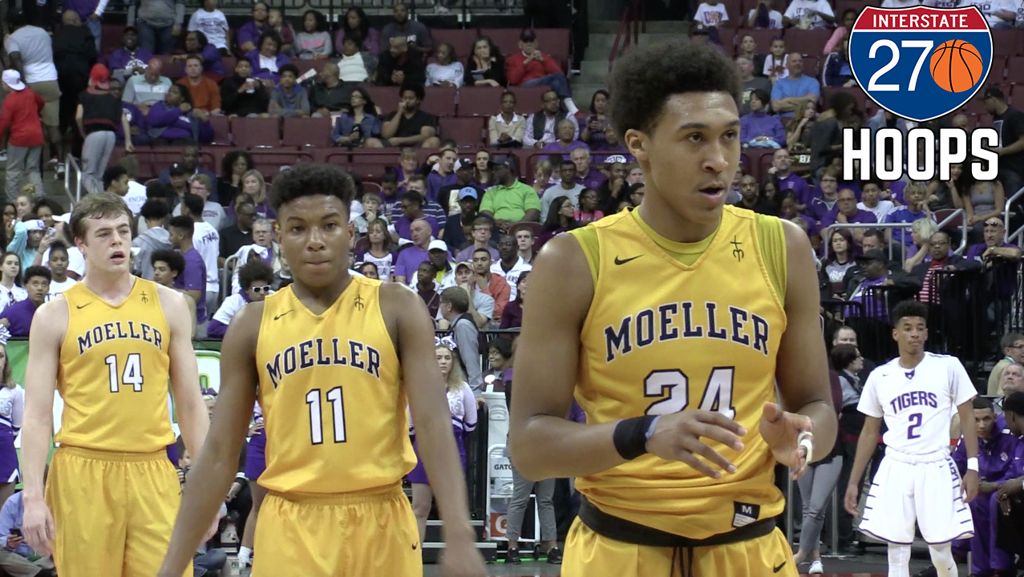