DUBLIN, Ohio -- Most coaches with a team full of freshmen and sophomores and only two returning players would not like their chances trailing by 14 points late in the third quarter against a top five player in the area and a team full of seniors.

Dublin Jerome head coach Richie Beard isn't most coaches, though. In fact, he's one of the best young coaches in the OCC who has his rabid group of young players out to a 3-0 start with three wins by a combined four points.

Trailing 34-20 1:08 remaining in the third quarter, Jerome went on a furious 22-7 run to end Wednesday's non-league game against London (0-2). The Celtics trailed the entire game until Beard put his team into a 1-2-2 press with springy 6-foot-5 sophomore CC Ezirim spearheading the defensive attack.

That proved to work wonders as Jerome took advantage after senior Dan Lee knocked down back-to-back threes to close the third quarter gap to eight points at the buzzer.

Ezirim was an absolute game wrecker in the fourth quarter, as he got things going with a strip and score near half court where the sophomore's 6-foot-8 wingspan made the difference on the deflection and ensuing transition finish through traffic.

The recent move-in from Hilliard Davidson was just getting started, as he took over the game on the defensive end of the floor at the head of the press. Forcing three more steals which resulted in six more points, Ezirim was the key factor in the Jerome run, as his defensive efforts and back-breaking impact led to a crucial 8-2 run in the middle of the fourth quarter.

Ezirim's efforts, combined with Lee's clutch ball handling and shot making ability gave Jerome a chance to win as the senior guard was fouled shooting a three with 1:41 remaining and Jerome facing a 38-37 deficit.

Lee calmly knocked down two of three attempts at the line to put the Celtics ahead for good at 39-38. Jerome forced a stop on the other end thanks to a big block from sophomore David Adolph on the low post.

With Lee heading back to the line, the senior delivered once more, splitting the pair and giving Jerome a 40-38 advantage with 13 seconds remaining.

As if his clutch free throws weren't enough, Lee stepped up for the biggest play of the game moments later. Guarding London superstar Trey Woodyard, the 6-foot-1 guard got physical with the junior wing on the perimeter, staying in front of Woodyard and stripping him for a game-deciding steal with seven ticks left on the clock.

With his team holding a two point lead and yet another close game in the balance, Lee did what good seniors do and put the game away, knocking down both attempts and giving the Celtics an insurmountable four-point lead.

While London knocked down a three at the buzzer, it was too little, too late for the Red Raiders, as Jerome completed the miraculous comeback to steal a one-point win at home.

After squeaking by Mifflin in overtime a week ago in its opener, the Celtics responded by going on the road and knocking off highly favored Newark in another overtime game two days later. Facing a London team with more size, experience and strength than the Cardiac Celts, Jerome was never rattled, as it rode on the broad shoulders and endless wingspan of its sophomore freak show Ezirim to fuel a comeback that could go to define this year's Jerome team.

Lee led all scorers with 18 points, while Ezirim added 10 points and a bevy of steals off the bench. Senior Derek Sanders added four points and an endless supply of toughness, as he helped Jerome gain several second chance opportunities on hard-fought offensive rebounds and even took two charges.

For London, senior Isaiah Hatem came off the bench and added a team-high 18 points. Woodyard was rather limited, finishing with 12 points and not seeing many touches inside the three-point line. Jerome did an outstanding job making the 6-foot-6 junior uncomfortable, forcing the ball out of his hands and closing out hard any time he looked to have an inch of space on the perimeter.

Jerome will look to improve to 4-0 as it heads on the road to Worthington Kilbourne to begin OCC-Cardinal play on Friday.

London will look to bounce back and notch its first win of the season on Friday as it hosts Kenton Ridge to kick off Central Buckeye Conference play. 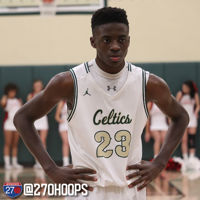 CC Ezirim (6'5 WF / Dublin Jerome / 2022): Simply put, Ezirim was the difference in Wednesday's win for Jerome. The wiry and athletic 6-foot-5 sophomore sparked the run that ultimately decided the game. Ezirim moves well laterally, showed some skill in the open floor where he was able to pick the pocket of London junior Jainaz Cameron twice, resulting in four Jerome points. Ezirim is a type of lengthy athlete that Jerome has never had in the program, as he will likely fill a roll very similar to tonight going forward for this team. Thanks to his motor and confidence level, Ezirim made big-time plays when Jerome needed him most, putting his length, mobility and athleticism to good use in a tough matchup against a London team with size, strength and physicality. Ezirim was a great matchup for Woodyard on the perimeter, as he challenged him with his length and made him uncomfortable in the final period. In a Jerome program where Beard is terrific at skill development, Ezirim will be someone to watch going forward, as he could be the prospect that takes this talented group of underclassmen to the next level. 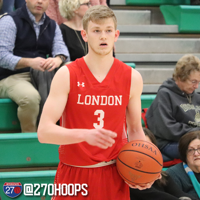 Trey Woodyard (6'6 WG / London / 2021): Wednesday was an off night for Woodyard, as Jerome did an outstanding job forcing the ball out of his hands and limiting clean looks. Being limited to 12 points, Woodyard had an uncharacteristically cold shooting night, making most of his impact on the interior in the first half on second chance opportunities. While the 6-foot-6 junior did knock down two triples, he spent most of his time in the second half beyond the three-point line, as London was not able to get him the ball closer to the basket where he could have taken advantage of his size and length against a much smaller Jerome team. With back-to-back losses to begin the year, we look for Woodyard to pick things up and bounce back in a major way on Friday, as we would not be surprised to see him go for 30+ points to get the Red Raiders its first win of the season. 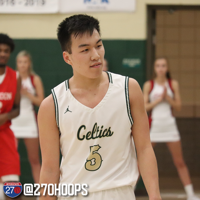 Dan Lee (6'1 PG / Dublin Jerome / 2020): Tough. That's the word you can use to describe the brilliant senior guard Lee. Keeping Jerome level-headed all game long and never getting rattled, Lee saved the game in the third quarter with his back-to-back threes in the final minute to turn what could have been a potential blowout into a game that Jerome could win in the final quarter. Lee is as intelligent as they come in the OCC, sporting a 4.6 GPA and insane 34 ACT, which he puts to use on the floor where he doesn't make the same mistake twice and sets his young teammates up for success. While one of the best passers in the area, especially in the ball screen game, Lee has takeover scoring ability, too, as he's a knockdown three-point shooter that can create his own looks all over the floor. When teams have a guy like Lee who has the attitude and intangibles to win big games, it usually means good things, as his younger teammates are then able to follow his lead and play with the confidence of having a guy that makes everything okay. Off to a roaring 3-0 start, Lee has been a major factor in that, as he sets the tone for this team and gives them the reassurance they need to win close games late. 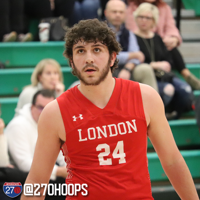 Isaiah Hatem (6'3 WG / London / 2020): While it was believed that Hatem would not be returning to the team just a few months back, London has to be thankful that its senior sharp shooter Hatem is on the floor. The 6-foot-3 senior had an impactful game off the bench, proving to be London's best offensive threat on Wednesday scoring 18 points and stretching the floor with his three-point shooting. A physical guard who made his presence felt on the defensive end of the floor with a block and a handful of steals, Hatem put together a strong all-around showing for the Red Raiders on Wednesday. We like the toughness and confidence that he has, as he helped London set the tone for most of the game, rattling the Celtics' young core before the fourth quarter run. With Woodyard getting the best defensive matchup each game and seeing multiple defenders any time he touches the ball inside the three-point line, it will be imperative for Hatem to shoot like he did on Wednesday for this London team to achieve its lofty goals. 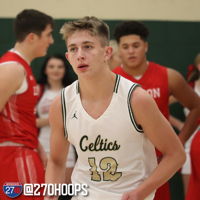 Ryan Nutter (6'3 G / Dublin Jerome / 2023): Nutter has the type of confidence and toughness that is hard to come by for freshmen playing at the highest level of high school basketball. Months after winning The Intangibles Award at the 270 Hoops Intro, Nutter put those intangibles to use for Jerome on Wednesday. While he did not score a single point, Nutter was impactful on both ends of the floor, playing an excellent defensive game where his weak side rotations and help defense allowed Jerome to be so successful in its zone. Nutter seems to always know where to be on the defensive end of the floor, even getting back on transition and taking a huge charge in the third quarter where the freshman took a huge hit by a senior. Offensively, Nutter is a shifty ball handler and advanced passer who can create space for himself and more often than not, makes the correct read with the ball. This freshman is tough and has plenty of talent, as he has a great senior guard to learn from in Lee this season before Beard hands him the keys to the program next winter. With the grittyness that we saw out of him on Wednesday, we don't think the Celtics will skip a beat next season with Nutter running the show. 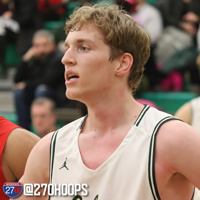 Derek Sanders (6'2 WF / Dublin Jerome / 2020): Sanders lands on our Hard Work Report this week for the contributions he made on Wednesday. While he only finished with four points, Sanders was highly impactful on the glass, helping Jerome secure a handful of offensive rebounds with his motor and toughness. Sanders took two charges on the defensive end, had a block and served a key role on the back side of Jerome's zone defense. As one of two seniors on the team, Sanders is a gritty role player that does the little things that you need from your role players to win. Toughness wins and Sanders has it.

RT @JakeSpegal270: Dylan Thompson and Dylan Herbert made WINNING PLAYS all night for Buckeye Valley last night, getting it done on both end…