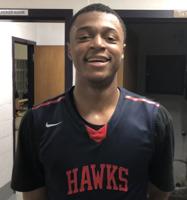 COLUMBUS, Ohio -- Some people are born to do amazing things. Morgan Safford was born to play basketball.

In his final game on the road at DeSales, Bishop Hartley's senior hero Safford stepped up in a way that he never had before. Leading Hartley back from a 45-31 fourth quarter deficit, Safford hit game-tying and game-winning threes in an absolute thriller of a 57-56 overtime win.

Ruining DeSales' (11-6, 4-2) senior night, Safford scored 14 points in the fourth quarter and overtime to help Hartley (9-7, 3-4) escape out of the game-threatening deficit.

Going on a 12-0 run to begin the fourth quarter, Hartley's rally was sparked by junior wing Kylan Kortokrax, who stepped up off the bench with back-to-back threes in the run. Kortokrax's final triple came with 5:05 to go, trimming the deficit to 45-43.

From that point forward, it was all Safford.

Forcing a stop on the next possession, Hartley sent senior forward Ryan Heuser to the line for two big three throws with 1:05 remaining.

As Heuser missed both attempts, the game looked to swing back in favor of DeSales, as senior wing Kayin Derden scored with 35 seconds to go to put the Stallions ahead 52-49, which would have been a perfect ending to Derden's final game at DeSales.

Safford said "not so fast."

With the final seconds of regulation ticking, Safford, who was completely smothered, knocked down a corner three right before the buzzer, knotting Friday's game at 52 .

After crushing the hearts of DeSales in regulation, Safford's revenge tour was far from over.

In the ensuing overtime period, Safford refused to lose.

With Hartley facing a 54-52 deficit with 1:46 to go, Safford knocked down two clutch free throws to tie the game once again.

Moments later, Safford showed up on the defensive end, as a costly Hartley turnover looked like a sure transition layup for DeSales' junior Kobe Righter. Already swatting a potential fast break bucket into oblivion in the first half, Safford was back to his old tricks.

Blocking Righter at the rim, Safford's defensive play triggered an energy in him that resembled that of Vegeta going Super Saiyan in Dragon Ball Z.

Righter did not back down, however, as a mid-range jumper from the junior moments later put DeSales ahead 56-54 with 45 seconds remaining.

When it seemed as if DeSales was going to come away with the victory, there was no doubt in the gym who Hartley was going to on the following possession.

Flaring off a screen 19 seconds later, Safford rose up with a hand in his face from the right wing.

DeSales had two chances to win the game in the final 16 seconds, however, both shot attempts fell short, as Hartley and its senior hero Safford stole a much-needed victory on DeSales' home floor.

Safford was the MVP on Friday, as Hartley needed every last one of his game-high 28 points.

Scoring half of his team's points, Safford scored from all three levels and defended with major passion. Blocking two shots, hitting four key threes and finishing through contact at the rim, Safford showed why he is unquestionably the top senior wing guard in the area. 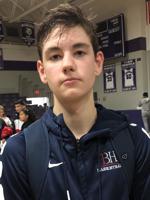 Safford was not alone, however. Going off for the best game in his young career, Kortokrax hit some major shots from behind the arc, as his length at 6-foot-4 and shooting prowess make a huge impact for the Hawks. Kortokrax stepped up when Hartley needed him most, as his back-to-back threes were the key in the Hawks' 12-0 run that got them back into the game.

After battling foul trouble in the first half, senior center Jordan Kirkbride gave Hartley big-time toughness in the final two periods of play, staying out of foul trouble and locking up on the boards.

For DeSales, the Stallions lose a tough one and will now have to claw and fight to win an outright CCL title. Sophomore forward Desmond Watson had a strong showing, finishing with 17 points and nine rebounds. Watson had a chance to win the game with six seconds left, as his potential game-winner from 10 feel fell just short.

Being outscored 26-11 after the third quarter, DeSales was out-toughed by Safford and the Hawks from the fourth period and beyond. Despite the loss, DeSales will have a great chance to recover and win a league title and more.

For Hartley, the Hawks pick up the biggest win of its season. Safford's clutch performance, coupled with Bishop Watterson's overtime win over St. Charles, forced a tie atop the Central Catholic League. Trailing DeSales and Watterson by two games, Hartley has an outside chance of the league title, as Friday's game was a must-win in every sense of the phrase.