LANCASTER, Ohio -- In some small school action on a Thursday night without many Central Ohio teams playing, we saw a great matchup at the point guard spot featuring some young and veteran talent in Division IV. Fairfield Christian rolled past Liberty Christian in the contest, winning 69-54.

Freshman guard Jared Rose had his fingerprints all over the game since the opening tip, scoring a career-high 30 points in dominating fashion during the win.

Liberty Christian knocked down key shots from role players early, looking as if they might have what it takes to hang around with the Knights. Big man Noah Triplett knocked down a big three in the second to cut the Knights lead to 23-15 with 4:45 to go, but Fairfield Christian turned it on shortly after.

Simply dominating Liberty Christian in transition, the Knights ran the floor at a great pace in the second as they did a solid job controlling the glass. A big and-one from senior Bradly Anderson increased their lead to 28-17 with 3:33 to go in the half, helping them take a 32-21 lead into the break.

Fairfield Christian took complete control of the game after halftime, using an almost instant 7-0 run behind five points from Rose to force a Liberty Christian timeout with the lead pushed to 39-21.

They rode this momentum through the end of the contest, pushing their lead to as much as 31 points after an and-one from Rose early in the fourth.

Despite his team being outplayed on both ends of the floor, Jackson had another fantastic showing for Liberty Christian, finishing with 26 points, eight rebounds four assists and four steals. Triplett also finished with nine points and six rebounds followed up by Kenton Gould with eight points.

Outside of the 30 points from Rose, the Knights also received 13 points and eight rebounds from Anderson. Junior Cam Collins also scored 10 and senior David Forbes chipped in seven points.

Jared Rose (6’2 CG / Fairfield Christian / 2022): Rose caught us by storm tonight, as we did not realize the full potential of the freshman until this performance. Though he was playing a team with only one collegiate prospect, Rose turned in a fantastic outing of 30 points, eight rebounds, four assists and five steals. Thriving in transition, he did an excellent job of getting the ball off of the rim and instantly getting the break going. In a lead ball handling role for Fairfield Christian, Rose has no problems in starting the break, and usually does a great job in ending it. He displayed both great vision and finishing ability in the open floor tonight. When he gets into the lane, he has a skilled array of finishing moves that he uses. He does an excellent job of getting his shot off around defenders and has great body control in the air at such a young age. He finished with soft touch floaters as well as using his body to create seperation, both traits that add to his offensive value greatly. He also showed ability to knock down the three by hitting two confidently in the contest.

On defense, he showed great instincts to come up with five steals in the contest. Though the other team made several bad reads allowing for some of these steals, he made high IQ plays to come up with all of them. With the Knights in a full court press for most of the night, he did a good job both defending the ball and making reads in the second level.

With tonight being our only viewing of Rose since last seeing him at The Intro in August, we loved the maturity that he has added to his game. At a school without a surplus of athletic talent, look for Rose to shine in the MSL for the next few seasons. 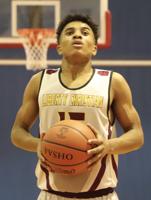 Delavonte Jackson (5’11 PG / Liberty Christian / 2019): In what was our second viewing of Jackson in the last four days, we came away even more impressed tonight. Finishing with 26 points, eight rebounds four assists and four steals, he dominated for a Liberty Christian team who was severely overmatched. A skilled ball handler with a deadly mid-range who can also score in the lane, Jackson would be more than a steal for any NAIA or Division III program in need of guard play. For an extremely in-depth look at his game, read Monday’s scouting report.