PATASKALA, Ohio -- In a non-league matchup on the road, Bishop Ready rolled over Liberty Christian, 91-47. Knocking down 15 threes, Ready was outstanding in the game, jumping out to a 47-23 halftime lead and never looking back.

While Liberty Christian was entirely outmatched, senior guard Delavontae Jackson was as good as any player on the floor, leading all scorers with 21 points in the loss.

Ready will look to continue to win on Tuesday at Franklin Heights before heading to Cincinnati Roger Bacon on Saturday.

For Jackson and Liberty Christian, the Eagles will look to bounce back on Friday against Patriot Academy. A top 10 scorer in the area, Jackson had a great performance against a solid defensive team with athletes. 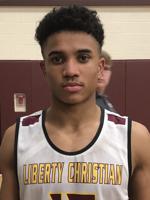 Delavontae Jackson (5'11 PG / Liberty Christian / 2019): A breakout senior in small Christian school ball, Jackson is a college prospect point guard who was the best perimeter player in the game on Monday. Jackson is a quick lefty who can get by defenders off the dribble and finish around the basket.

While Jackson is a talented ball handler with a good feel, we were blown away with his jump shooting off the dribble. Hitting seven jump shots off the bounce, Jackson's mid-range game was relentless. The senior guard hit a two dribble pull up from 12 feet, showed a great crossover that he turned into a step back jumper from 16 feet, hit a 14 foot jumper off movement from the foul line extended, hit another left to right crossover from the baseline, hit a turnaround jumper from just inside the three-point line and ended the game with a mid-range jumper from the baseline, also off the bounce.

The 5-foot-11 guard plays with great pace, gets good elevation on his pull up jumper and can hit it with a hand in his face. On a team with zero college prospects, Jackson still plays within the system and does not show any signs of selfishness or being a bad teammate, which is impressive when you consider the drop off between him and everyone else on his team.

A good student with a great attitude and work ethic, Jackson would be a no brainer look for Division III and NAIA programs, as he has a smooth offensive game and reliable mid-range skill set that is not so common anymore. Able to get by defenders off the dribble and make good decisions on the move, Jackson is a good passer with vision and touch.

The senior guard is an under the radar prospect that can play at the next level and is receiving interest from NAIA Taylor University, where Harvest Prep alum CJ Penha currently plays. 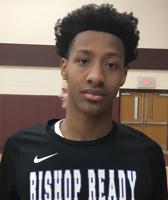 Darius Parham (6'3 WG / Bishop Ready / 2021): A sophomore wing guard that continues to improve, Parham has evolved from being a power forward a year ago. With great ball skills and a reliable outside jumper, Parham dominated off the bench on Monday, finishing with 12 points, five rebounds and four assists. Parham rebounds like a grown man, can defend multiple positions and is a talented passer that can see both sides of the floor.

We love Parham's motor and confidence, as he can score on multiple levels and is the most important piece on a Bishop Ready team that is improving by the day. One of several intriguing sophomores on the Silver Knights roster, Parham is already one of the better players in the CCL and could have a chance to help lead this team to a conference title and more within the next few years.

Garrison Budd (6'0 PG / Bishop Ready / 2021): The younger brother of former St. Charles stud guard Braden Budd, Garrison Budd is next in line. Improving each time we see him, Budd was excellent on Monday, finishing with 17 points in a little more than a half of basketball. The 6-foot sophomore knocked down a pair of threes and finished at a high level near the rim. We love Budd's toughness and feel, as he makes great decisions with the ball, can beat defenders off the dribble and is a knockdown shooter from the perimeter. Behind Budd and the rest of the cast of sophomores on the roster, Ready is going to be one of the area's most intriguing teams in the next few years.

Jaishan Norris (6'1 WG / Bishop Ready / 2019): The glue guy on the Knights' district runner up team a year ago, Norris has evolved into more of a primary scorer role for Ready as a senior. Norris filled that role perfectly on Monday, knocking down his first three perimeter jumpers and finishing with 13 points on four triples. The senior is a physically developed guard that plays with a chip on his shoulder, as he can mix it up on the boards, can defend multiple positions and is now shooting the ball on the wing at a higher level than ever before. Norris is just a tough kid who loves to play.

Azzan Daniels (6'1 PG / Bishop Ready / 2021): Yet another sophomore on the Ready roster, Daniels brought great energy off the bench, finishing with six points and three steals. A long ball handler who still looks like he's stretching out, Daniels has a great motor, plays with confidence and has long strides that he uses to get by defenders and into the lane. With his brother PJ Daniels transferring from Hartley to Ready to play alongside him, Azzan Daniels is another prospect on a Ready roster that should only continue to strengthen from here on out.

ICYMI: Week 1 of the Proving Grounds was LOADED 🔥 Check out the full highlights from the Top 28 Challenge ⤵️ https://t.co/jeKv9APPF3