Both teams came out of the gates knocking down shots on offense, and Teays Valley took a 24-22 lead into the second frame. The Vikings shot 11 of 17 from the field in the first quarter thanks in large part to finding easy looks in the paint for senior forward Max Young.

Hamilton Township answered with a 9-0 run early in the second quarter though, proving to be the stretch that they needed to gain a sizeable lead heading into the half. Behind a combined 23 first half points from junior Marquis Moore and senior Tyler Block, the Rangers took a 36-29 lead into the locker room.

Showing no signs of slowing down, Hamilton Township increased their lead to as much as 13 points in the third quarter. Teays Valley answered with a 13-4 run of their own to end the quarter, sending themselves into the final frame trailing 47-43.

With the Vikings trailing 53-47 with 2:46 to play, two huge three-pointers from sixth man Tanner Kendig cut the Rangers lead to 55-53 with 37 seconds left to play in the contest.

After a missed three off of the backboard for Teays, Kendig found himself in the right spot at the right time, grabbing the rebound and scoring to send the game to overtime all tied up at 55.

After back-and-forth buckets from Moore and Young to keep the game tied at 57, Hamilton Township went cold for the rest of overtime, failing to score a single point and falling to the gritty Vikings, who did everything that they needed to in order to seal this one.

Moore led the way for Hamilton Township with 20 points, followed up by Block with 17 points. Senior sharp-shooter Luke Tucker also contributed nine points on three triples. The Rangers fall to 8-4 with the loss and will be back in action next Tuesday against a tough Canal Winchester team.

Young absolutely dominated the paint all night, finishing with a double-double of 17 points and 17 rebounds. He also blocked three shots. Kendig and senior Ryan Wolfe each scored 13 points of their own, and senior Brodie Booth added eight points. This win snaps a four game losing streak for the Vikings, and they will play again next Tuesday against Grove City. 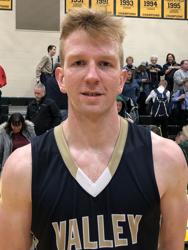 Max Young (6’4 WF/ Teays Valley/ 2019): Young owned the paint on Thursday night, as he finished with a monster statline of 17 points, 17 rebounds and three blocks. He uses his strong, long frame to his advantage, helping him grab a plethora of rebounds and finish through contact. He also has a very good vertical, helping him soar up in the air to control the glass. Though he had several second chance points tonight, Young also scored out of the post, showing off good touch, IQ, and a solid spin move. He has a rather unconventional jumpshot, as he takes the ball behind his head before shooting, but did knock down a mid-range jumper tonight. Young has the ability to put it on the deck and score as a wing, but we would like to see him improve on his perimeter shooting ability before making the transition to next level. Young has put up solid numbers so far this season, and should be on the radar of Division III programs in the region. 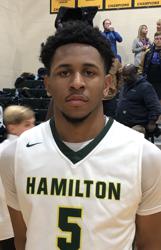 Marquis Moore (6’0 WG/ Hamilton Township/ 2020): Moore put on another impressive showing in Thursday night’s viewing as he finished with a game-high 20 points. He did this by scoring in a variety of ways. Marquis excels at putting the ball on the floor and finishing in the lane, which he did all night tonight. He displayed a tight handle and quick dribble moves to get past defenders. As he was a tough matchup for anyone on Teays Valley's roster, Moore forced the Vikings into a 2-3 zone late in the first half. Marquis also knocked down two three-pointers tonight, which is promising to see considering it’s an asset that will help his game grow in volumes. He displays great end-to-end speed and also great court vision when running the floor in transition. Marquis also played a solid defensive game tonight, making several plays that were clear signs of his extremely high basketball IQ. Moore has put up great numbers in the MSL this season and should garner more attention as the season progresses.

Tyler Block (6’1 WG/ Hamilton Township/ 2019): Block continued his stellar season tonight by finishing with 17 points and three steals. Tyler is a confident outside shooter who also has a great first step that allows him to get into the lane at will. He showed this off tonight by knocking down two triple’s to go along with several tough floaters and finishes in the lane. When he gets by his defender, Block has a great touch that allows him to finish despite being covered by a larger defender. He was also a pest on defense all night, giving the Vikings’ guards issues on the perimeter consistently. Tyler is a confident guard who can score at will, and could garner some D3 attention as the season goes on. 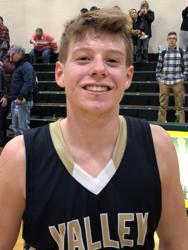 Tanner Kendig (5’11 WG/ Teays Valley/ 2019): Coming off of the bench for the Vikings, the senior Kendig had his breakout game of the season, going for 13 points, seven rebounds and three assists. Though his impact was not truly felt until late in the fourth quarter, Kendig played a solid game off of the bench all night. With Teays Valley trailing 53-47 late in the game, Kendig scored the Vikings’ final eight points in order to fuel the comeback and send the game into overtime. He did this by knocking down two three-pointers and finishing a lay-up after grabbing an offensive rebound. Tanner is a great role player for the Vikings, as he brings shooting, defense and grit to the table. In order to win games like tonight’s, you must have players like Kendig on your roster.

Recruiting Update: Commitment season in full swing for local seniors We take a look at all the latest recruiting n… https://t.co/KFNloMEA7g

Taevion Kinsey is the MOST ELECTRIFYING player in C-USA 🔥 Sophomore season highlights from the high-flying Marshal… https://t.co/97TpGm3HSm