Standouts from Week 1 of the Open Division

LEWIS CENTER, Ohio -- While the 270 Hoops Fall League is in its second season, Sunday was the first installment of the Open Division. Open to all high school players in Central Ohio, more than 110 of the area's talent from all over came together to compete in the division's first round of games.

Let's take a look at some of the top performers from Week 1 of the Open Division.

Ethan Stearns (6'2 G / Watkins Memorial / 2019): Stearns came out of the gates hot, scoring 15 points in both games to lead all scorers in the division. Stearns is a quality guard who can score it with the best players in the Licking County League and beyond. With several Division III schools hot on his trail, Stearns is playing his best basketball yet right now.

Nik Brannon (6'5 SF / Olentany Orange / 2019): Brannon is an intriguing prospect. With great length at 6-foot-5, Brannon is an above average athlete and can score it in a variety of ways. The top prospect on his NC Bullets team, Brannon helped his squad go 2-0 and was very impressive in the process. You could see Brannon's recruitment spike over the next few weeks with continued showings like last week.

Will Riffle (6'2 SG / Amanda Clearcreek / 2019): Riffle is one of the best players in the Mid State League and a huge reason why many are optimistic about Amanda Clearcreek basketball this upcoming season. With quality size, Riffle scored it as well as anyone in the league, knocking down shots, getting to the rim and finishing athletically at the rim. Riffle is a small town special for any Division III programs looking for a big guard with confidence and ability.

Josiah Mobley (5'10 PG / Reynoldsburg / 2021): One of the top ball handlers in the event, Mobley played well in both games for the Celtics. Placing in the top ten in scoring, Mobley did a great job facilitating for his team as well, finding open teammates and setting up offense. Mobley has a lot of ability and could be one of the late blooming guards that really blossom as a junior or season.

Victor Searles (6'7 C / St. Charles / 2020): Seeing Searles for the first time on Sunday, we were impressed with the wide bodied 6-foot-7 post. Searles carved out space on the block, finished through contact and was a difficult matchup for defenses. In a Central Catholic League that is rebuilding from several strong graduating classes in a row, Searles could be a guy that breaks out in the conference this season for St. Charles.

Troy Scowden (6'5 WF / Buckeye Valley / 2022): Scowden is one of the elite prospects in the 2022 class and the best freshman in the Open Division. A physical athlete who caught a body in his team's second win of a 2-0 day, Scowden made his presence felt early on in the season. The best prospect at Buckeye Valley in a long time, look for Scowden to make waves this season as a freshman. Scowden and fellow fall league and high school teammate Dylan Thompson give the Barons a bright future.

Matt Kennedy (5'8 PG / Olentangy / 2021): Kennedy jumped off the radar to us in the second game for The Academy, attacking the basket with reckless abandon and finishing among taller defenders. Kennedy plays with a great motor and can score it in a variety of ways. Look for Kennedy to help an already loaded Olentangy backcourt this winter. Kennedy, along with Circleville's Riley Gibson and Logan Elm's Jeremy Wietelman form a solid sophomore backcourt for The Academy.

Cory Norris (6'0 PG / Zanesville / 2020): A player we discovered last fall, Norris was a welcomed addition to the Open Division. A talented scoring guard who is one of the tougher one-on-one matchups in the league, Norris was solid on Sunday, placing among the division's top scorers. As Zanesville graduates two studs in Cam Brooks-Harris and Aronde Myers, look for Norris to have a chance to really increase his production this winter.

Tyler Kindberg (6'3 WG / Worthington Christian / 2021): After battling injuries over the summer, Kindberg is healthy and looking back to 100 percent form. Kindberg's debut was impressive, as he was the best player on the floor in the Rockets' loss to the Thunder. Kindberg is a big, athletic guard who can get to the rim and put it down. Kindberg was also able to stretch the floor and knock down outside jumpers with consistency. Check back in two years, Kindberg could be on the best players in the class.

Jarius Jones (6'3 WF / Gahanna / 2021): A summer stock riser for us, Jones, who we first saw at the Dayton team camp, impressed for Hidden Gems 2021 on Sunday. A physical, athletic wing who plays with a GREAT motor, Jones led his team in scoring on the day. On a Gahanna team ripe with a ton of underclassmen prospects, Jones may be under the radar now, but don't be surprised if he develops into a supreme talent in the area.

Grant Yeater (6'1 G / Dublin Coffman / 2019): Yeater was the MVP for the NC Bullets in its opening win over The Academy, knocking down four deep threes to lead his team. Playing in a reserve role for the Rocks last winter, Yeater could get more action in a loaded Coffman backcourt where his ability to stretch the floor will be needed. Yeater is a composed guard with a veteran presence who could be a big reason why the NC Bullets win an Open Division title.

Quinn Foster (5'11 G / Olentangy Liberty / 2021): The MVP for Hidden Gems 2021 in the opening session, Foster made his presence felt quickly in the Open Division. Going for 11 points in a win over the Warriors, Foster showed an ability to put the ball in the bucket that should allow him a chance to earn some minutes for the Patriots this winter. Foster along with fellow sophomore Henry Hinkle give Liberty two sophomore guards that should lead the backcourt for years to come.

Shamar Brittman (6'3 WF / Westerville South / 2021): Brittman was YesU's leading scorer as the squad went 2-0 last week. A lengthy forward who helped YesU play excellent defense last week, Brittman could be a big stock riser in the 2021 class in this event. Westerville South will be mainly senior laden this season but look for Brittman to be one of the guys to carry on the next generation of the program.

Mario Davis (5'7 PG / Harvest Prep / 2021): Davis absolutely lit it up on Sunday in our one viewing of him. With Mobley handling most of the point guard duties for the Celtics, Davis excelled in his spot up shooting role, knocking down four triples, three of them in a row. Harvest Prep seems to be a breeding ground for quality guards and with David Dennis' uptempo, barrage of threes style of play, Davis could find himself a niche on varsity this winter.

Hervon Jacobs (6'4 PF / Africentric / 2020): Another player on a winning program with outgoing talent, Jacobs could find himself a productive role for Africentric this winter. He showed flashes of why that could happen on Sunday, playing quality basketball around the rim for the Rockets. A long forward with some ability near the rim, Jacobs could be a breakout junior in the City League South this season.

Anthony Bowman (6'2 SG / Africentric / 2019): Staying with the Nubians here, Bowman was solid for YesU on Sunday, posing to be one of the better transition scorers in the event. On a team with mainly sophomore, Bowman will be relied upon greatly to provide some leadership for YesU in the Open Division. An above-average athlete who has received big-time minutes for Africentric the last two years, Bowman could be due for a breakout year. Consistency is the key for Bowman, as he does not lack ability at all.

Heath Jeffries (6'5 PF / Newark Catholic / 2019): One of the bigger players in the league, Jeffries was stellar in helping Nova Morgan get out to a 2-0 record in division play last week. A senior laden team with much experience, Nova Morgan has the potential to win a league title and its guys like Stearns and Jeffries who will be relied upon greatly. In a Licking County League where Newark Catholic hasn't been as dominant as years' past, the Green Wave are working hard to get back to that level and Jeffries could be a big reason why they get there.

Dante Woods (5'10 PG / Kipp Academy / 2021): The first player from Kipp Academy that we have ever watched, Woods did not disappoint for the Thunder on Sunday. A shifty guard who plays with confidence, Woods knocked down a pair of threes (with an arch that reminded me of David Lighty), beat defenders off the dribble and finished creatively at the basket. While Kipp is still relatively new to the area, Woods will be a quality player who should lead the program in its infancy.

Jared Frey (6'4 WF / St. Charles / 2022): Frey is a pure wing and one of the more refinded prospects in the 2022 class. On a Celtics team with plenty of scorers, Frey stood out skill wise and athletically. The top prospect in a loaded freshman class for St. Charles, Frey could be the type of player to lead the Cardinals back to the top of the CCL a few years down the line.

Hayden Thomas (6'0 G / Pickerington North / 2021): Leading Nova Faieta on Sunday, Thomas impressed on both ends of the floor. Another talented guard in a Pickerington North program that might have more intriguing underclassmen guards than any other in the area, Thomas could be a breakout sophomore in the Open Division by the end of the year. 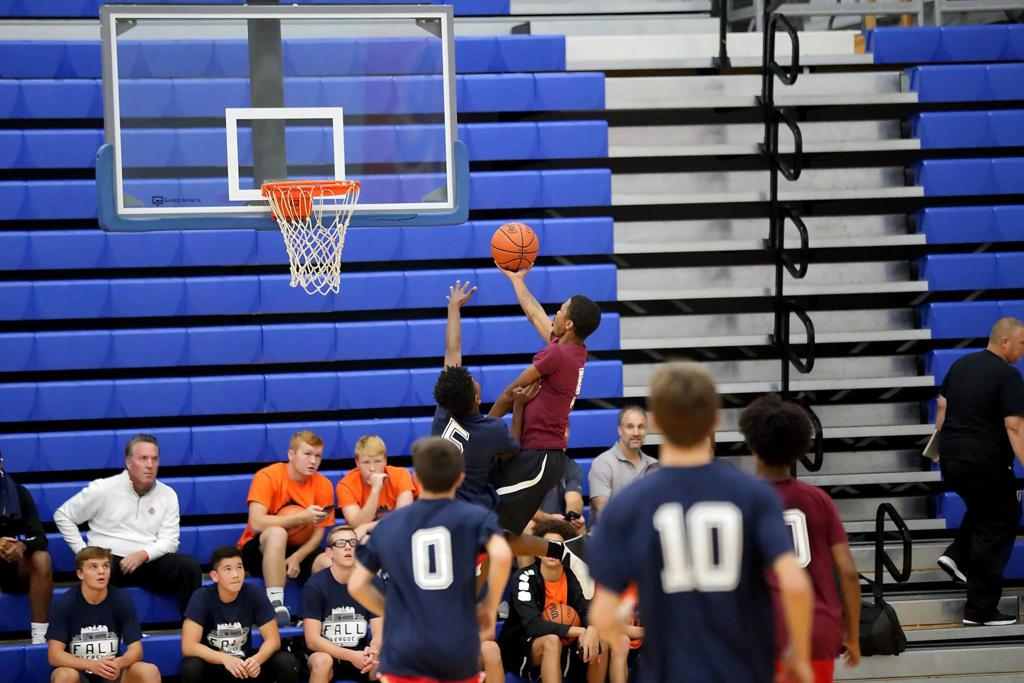