Francis spoke with 270 Hoops prior to announcing his decision

Jeremiah Francis during a visit to North Carolina in June

COLUMBUS, Ohio -- It only took nine days after being offered by Roy Williams for Pickerington Central's Jeremiah Francis to commit to North Carolina.

Francis confirmed the commitment to 270 Hoops prior to Friday's announcement.

"I mean, it's just North Carolina," Francis told 270 Hoops of the thinking behind his decision. "It's a powerful basketball program and really just a great place to be."

Announcing his decision via Twitter, Francis becomes the first player in Ohio's 2019 class to commit to a college program, and there are arguably none bigger than North Carolina.

Trimming his list to 10 schools last Saturday, Francis considered Ohio State, West Virginia, Iowa, Indiana, Purdue, TCU, Dayton, Florida State and Missouri, but could not pass up on what North Carolina had to offer.

"Like I said before, it's just UNC, they're the defending national champions," Francis said. "The coaching staff is great there."

While Ohio State seemed like the most comfortable spot, as Francis would've been able to play close to home and for his father's alma mater, Francis also has a little bit of history with North Carolina.

"I enjoyed [UNC] so much when I was there," Francis said. "I actually have a lot of relatives in North Carolina."

In addition to a system at North Carolina that is perfect for Francis' physical downhill style of play, the rising junior will get a chance to reconnect with high school teammate Sterling Manley. In his one full season with Manley this past winter, Francis excelled, as the duo led Pickerington Central to its first regional championship since 2012.

"Playing with Sterling again will be great," Francis said. "I know he will be excited to see me whenever he comes back home. That experience will be great since we already have so much chemistry."

Much like his high school career, Francis will get two more years to play with Manley, this time under the bright lights of the Dean Dome.

After going 46 years without nabbing a player out of Central Ohio, North Carolina has locked down commitments from Pickerington Central in less than a year. More impressive is the fact that Francis and Manley live in the same neighborhood. While Manley was a bit of a hidden gem, recovering from a devastating injury to become a highly sought-after recruit, Francis has had a much different story.

It was that kind of production and excellence that led North Carolina to offer Francis last Wednesday. Interestingly enough, Francis was the first point guard for the Tar Heels to offer in the 2019 class, and that resonated with the 6-foot-2 floor general.

"I was really shocked when [the UNC staff] told me I was the first guard to be offered," Francis said. "It feels like Coach Williams really wants me to come into the program and lead him to more victories and championships."

Performing at an elite level all AAU season long, Francis took it to a completely different level at the Adidas Summer Championship in Las Vegas during the last week of July.

With schools like North Carolina, Kentucky, UCLA and Kansas tracking Francis, UNC took the lead with Francis during the live period. Sending multiple coaches to watch him in every game, North Carolina made it clear they were serious about landing Francis.

UNC's track record of placing guys in the NBA weighed heavily on Francis during the later stages of his recruiting process.

"It factored in a lot," Francis said. "Coach Williams loves his point guard and I feel he can take me to the next level as a person and player."

With two more seasons of high school basketball ahead of him, Francis says he feels relieved to have the recruiting process behind him and to be committed to a school like North Carolina as a rising junior.

"It just honestly feels great, a lot of people can't say that they are going to the University of North Carolina," Francis said. "It's a special feeling really."

Stay tuned to 270 Hoops for more regarding Francis and his commitment. 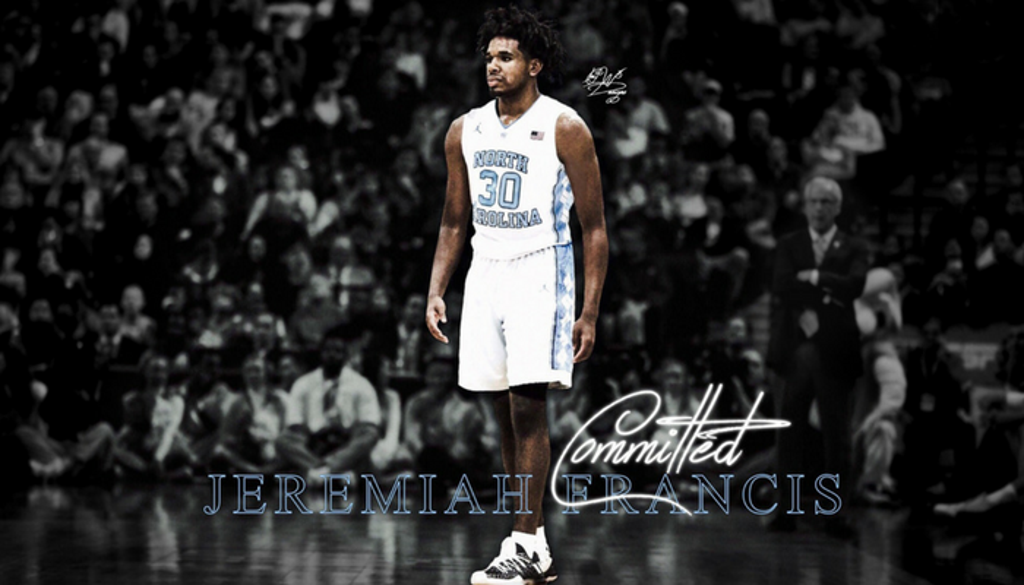 DUKE OR OHIO STATE?! Seth Towns is the #1 TRANSFER IN AMERICA 📈 Towns will choose between Duke and Ohio State toni… https://t.co/ru7gsgxsHl