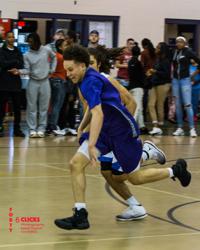 COLUMBUS, Ohio -- High school basketball hasn't always been easy for Tre Baumgardner. For the first two years of Baumgardner's career, it was an up and down journey for one of the area's premier guards. With the turbulence of the past behind him, Baumgardner enjoyed a breakout junior season that started in the winter when the point guard commanded the Africentric backcourt.

"I'm happy to be in one spot in AAU and school because I don't have to worry about anything else except playing the game I love and continuing to get better," Baumgardner told 270 Hoops.

Beginning his career at the now-defunct City Prep Academy on Columbus' east side, Baumgardner was part of a celebrated freshman class in the fall of 2014 that included Pickerington North's Jerome Hunter and Eastmoor's Stanley Williams. As issues with the school's legitimacy and academic standing caused a mass exodus, Baumgardner would move on to Africentric.

With a virtually wasted freshman year, Baumgardner would struggle to find minutes as a sophomore with the Nubians. As Africentric featured a deep senior class during Baumgardner's second year with the Nubians, the guard would have to wait his turn.

The patience paid off, especially in the summer of that season, when Baumgardner made the switch to Team Blaze Select in the AAU season. Running alongside four-star recruit Musa Jallow, Baumgardner was able to focus on being an all-around point guard.

That shift in play style greatly benefit Baumgardner, as he took the momentum of last summer's AAU season into the winter. Returning to Africentric, Baumgardner had a chance alongside senior Landon Martin and junior Jah Bennett to represent the new era of Nubian basketball. And Baumgardner did just that - even if he is humble about.

"I feel that my performance [last year] was okay," Baumgardner said. "It was basically my first year and I was adjusting the whole season so I couldn't really be consistent. This year, I want to be more consistent and keep a high motor for the whole game."

Averaging 17.1 points and starting every game, Baumgardner was consistent - as far as the stat sheet goes - for most of the season, pouring in a career-high 30 points vs. Walnut Ridge in January. Never scoring below nine points in any game last season, Baumgardner officially made his mark as one of the area's top point guards, as his production matched his skill level for the first time in his career.

While Africentric would fail to win a district title for the first time since 2013, falling to eventual state runner-up Wellington by two points, Baumgardner closed the chapter of a breakout junior season.

Back with Team Blaze Select for the summer, Baumgardner has enjoyed a strong AAU season by all regards.

"It's going real well so far," Baumgardner said. "With this team, I have to be more of a true point guard because I have other people around me that can score at different levels, so I set the table first before I think to score and just let the game come to me."

@straplee has had a solid start to the AAU season at the pg spot racking up assists & knocking down shots while improving his focus on "D". pic.twitter.com/pnvij0urkf

Excelling as a facilitator and especially on the defensive perimeter, Baumgardner has not disappointed this spring. College coaches have also taken note, too.

While Baumgardner admits his recruitment has been a "little slow" so far, programs are still inquiring about the 6-foot-1 point guard.

A bit of a Division II-I tweener, Baumgardner can greatly help his recruitment for the rest of the summer leading into a senior year where the guard is looking to improve as a leader.

"To be successful this year I am going to have to lead by example, which starts on defense," Baumgardner said. "I feel that if I lock down my man 94 feet, my teammates will do the same. And also just show the passion for it and they will follow me and give their all if they see me, as a leader, giving my all. It all starts from the top."

As Africentric's unquestioned leader coming into this season, Baumgardner has embraced what comes with the territory of being 'the man.'

"The biggest challenges are that other teams watch a lot of film on you and study your game and tendencies," Baumgardner said. "Also in the City League, I got denied from the jump to the final buzzer, which was hard to get used to initially but once I figured out how to get freed up from being denied, it wasn't that much of a problem."

Most confident about his IQ, defense and play-making ability, Baumgardner will need to bring those qualities to the floor in each and every game for the Nubians.

In a City League-South division that should be as good as nearly any in Central Ohio, each game will be a battle for Africentric. For a player like Baumgardner, who has defeated adversity for his entire career, you can bet that he will be ready.