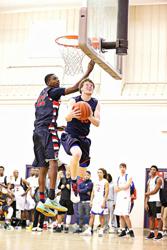 COLUMBUS, Ohio -- As the catalyst of a VCC-Nova Beard team that plays a high-paced brand of basketball, Garrett Tipton is rising up recruiting boards quickly.

A crafty and athletic 6-foot-5 wing with boat loads of skill to go with it, Tipton was tracked closely by every top Division II program in the region last weekend. Ascending as one, if not the top priority Division II recruit in Central Ohio, Tipton is entering the stages of a recruiting process that is soon to hit a fever pitch.

"I've been talking to UMass-Lowell, Wheeling Jesuit, West Liberty, Ashland, Stone Hill, Malone, Findlay and High Point as well," Tipton said of the programs tracking him closely. "Stony Brook and Oakland also told coach [Richie] Beard that they are coming to see me in July."

With a visit planned to Wheeling Jesuit on Friday and West Liberty a week later, Tipton could be close to receiving his first scholarship offer. While a wing guard with terrific size and shot-making ability, it has been another trait that has Tipton high on the radar.

"[Coaches] really love my athleticism and how I can get to the rim," Tipton said. "They all say I have a high motor and that they can do anything with me because of that high motor. They love that I can knock down the open shot at any point in the game."

On a VCC Nova team that averaged north of 90 points per game in an undefeated pool play round last weekend, Tipton has been able to show his full arsenal of skills as a high-wire wing that plays with a mean streak.

"It is really fun playing with these guys and how we move the ball," Tipton said. "You feel once you give it up that you will get it back. We can pass and we like each other on and off the court, which helps a lot in the game. I have been able to show off my entire skill because I am counted on every game to play well and score. And that shows I can play that way all the time."

As Division II programs have been pleasantly surprised by Tipton's athletic acts on the floor, his shot-making has been just as impressive. Performing at a high level on both ends of the floor so far in the AAU season, Tipton has embraced a change of roles this summer.

While a complimentary piece on OH-Nova Tillman last summer alongside Jerome Hunter, Tipton was asked to move to another Nova squad this spring. As some players may look at a move like that as a "demotion" of sorts, Tipton did the exact opposite. Realizing he had a chance to lead a talented unit of his own, Tipton has relished on the opportunity ever since.

"The transition has been easy. I have felt that I have always been someone who can lead a team like I am now," Tipton said. "It really does show off my full arsenal because I am in a free style offense where I can make moves at any point in the game with room to get to the rim or find the open man."

While the AAU summer will likely open up plenty of recruiting opportunities for Tipton, the 6-foot-5 wing is gearing up for a senior campaign at Hartley that figures to be promising. Running alongside rising junior Morgan Safford who we featured on Wednesday, Tipton has major expectations for the winter.

As St. Charles and Bishop Watterson have dominated the Central Catholic League, winning the last five titles combined, Tipton is looking for a changing of the guard in his final go around.

"I think we are ready," Tipton said. "You have the key pieces in me and Morgan that can lead the team but our role players will really help us get there.  Players like Peyton Collins and Major Lowe are really going to get us to that point. We feel we are ready to lead the CCL and we have the pieces to do it."

For Tipton, putting on the Hartley jersey every night is somewhat of a challenge in and of itself. Living in the small town of Orient, which is roughly 30 minutes from Hartley, Tipton says that type of distance requires a little more dedication.

"You have to have more drive to get up and get moving everyday," Tipton said. "It is just something that I am used to because I've been training in the summer and off season in Columbus already. But regardless, I just have to have the drive to do it everyday."

With one more season to go at Hartley, Tipton is determined more than ever to prove that the Hawks can do more than just win state football championships.

"Winning the CCL would be a goal I have always wanted since I came to Hartley. It would show that we're not just a football school but also a basketball school," Tipton explained. "It would mean everything to our school and our fans. And I think it's time to get there."