COLUMBUS, Ohio -- This is why it's called March Madness. With Pickerington North's first-ever district title on the line, senior guard Matt Lanier hit the biggest shot in program history, connecting from 32 feet on a game-winning triple to upset Newark, 59-58.

Appearing in its first-ever district final on Saturday, No. 9 Pickerington North knocked out former OCC-Ohio rival No. 2 Newark behind a total team effort. While star junior wing Jerome Hunter got the Panthers going in the first half with 20 points, the rest of the Panther unit would step up in the final two quarters.

After a three from Hunter would give Pickerington North a 32-22 lead with 2:04 to go in the half. While Newark would punch right back, going on an 11-0 run that stretched into the early parts of the third quarter, Pickerington North would not be deterred.

Lanier helped start and finish a 5-0 run for the Panthers, as a hustle rebound from the senior led to a tough bucket from Hunter, which was then topped off with a corner three from Lanier. Taking the lead back at 37-33 midway through the third quarter, Pickerington North would be tested in the coming moments.

Heading into the fourth quarter tied at 46, Saturday's matchup would only get better in the final frame. Leading by as much as four points at 52-48 with 5:20 to go, Pickerington North would allow a 4-0 run from Newark to tie Friday's game with 3:44 remaining.

Going back and forth for the next few minutes, Newark would appear to strike the final blow, as senior forward Justin Carter scored inside to give the Wildcats a 58-56 lead with 17 seconds to go. That lead would not last for much longer, however.

Striking back on its final possession, Lanier was left open six feet behind the three-point line, knocking down a devastating triple to put Pickerington North ahead 59-58 with less than a second to go.

Unable to get a shot off on its final possession, Newark's state championship dreams diminished within the blink of an eye. As stellar senior BJ Duling picked up three fouls in the first half alone, Newark would not get the production it would normally project from the Kent State signee.

For Pickerington North, however, Hunter was a mad man from the opening. Attacking the Newark defense with a vengeance, Hunter knocked down five threes  en route to a 24-point performance to lead all scorers. Adding 10 rebounds to his total, Hunter played a near perfect game until fouling out with just under a minute to go. Hunter's greatest impact was arguably felt on the defensive side of the floor, as his length and physicality was the ideal matchup for Duling, who scored well below his average on Saturday.

Outside of Hunter, junior post Eli McNamara added eight points and five rebounds, giving Pickerington North a tough presence inside. Coming off the bench for nine points, junior guard Tyler Potts came alive in the second half, scoring all of his points in the final two quarters. Potts also added three assists and four steals to his stat line.

Defensive stud junior Dondre Palmer finished with seven points, but took five important charges on the game, including one that gave Duling his third foul in the first half. The hero of the night, Lanier, finished with six points on all three-point field goals.

For Newark, Carter led the way with 16 points, stepping up mightily in place of Duling. Junior forward JT Shumate added 12 points, while senior guard Hunter Dennison played a tough game, finishing with 11 points and five assists. Duling finished with eight points, missing a lot of action due to foul trouble in the first half.

With the win, Pickerington North advances to its first ever regional tournament. Scheduled to take on No. 4 Upper Arlington on Thursday, March 16 at 7 p.m. at Ohio Dominican.

For as impressive as Lanier's game-winner was, the strides in the Pickerington North program are more awe inspiring. Taking over a program that went 3-20 the season before his arrival, Jason Bates has won a district title in just his third season at Pickerington North. 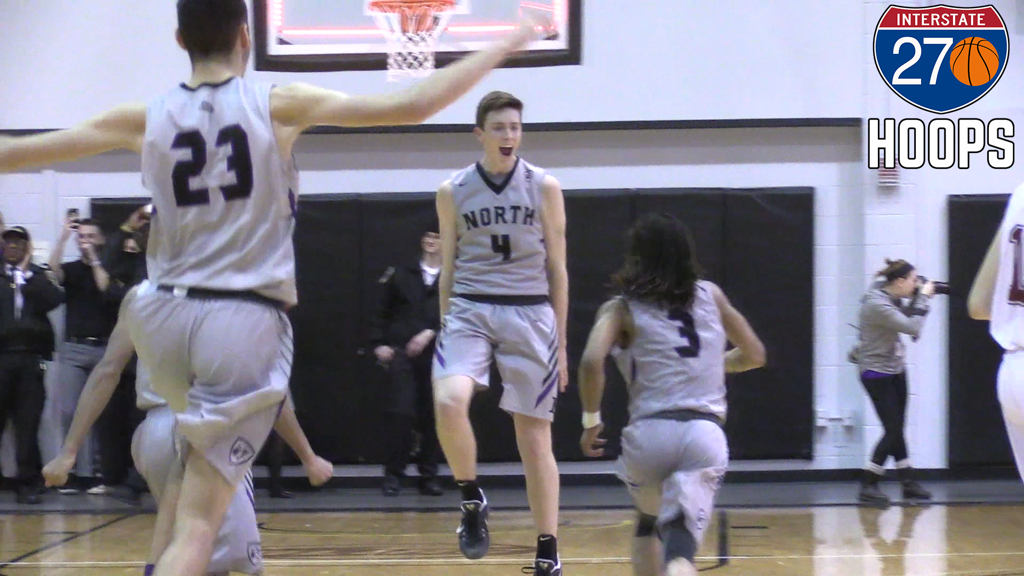