Holding No. 4 Bishop Hartley to nine points in the first half, No. 10 Linden-McKinley delivered the upset of the district tournament up to this point, taking down the Hawks on the road 39-36.

Leading 29-10 at one point, Linden managed to hold off several Hartley chances to send Thursday's game to overtime, holding tight in the fourth quarter to advance to its first district semifinal in more than a decade.

Leading 21-9 at half, Linden managed to survive, despite being outscored 27-18 in the final two periods.

Linden picks up its biggest win in the last decade for a program that has truly been built from the ground up. Knocking out the top-seeded team in the Worthington 2 bracket, Linden advances to play No. 7 Heath, who knocked off No. 8 Beechcroft on Thursday.

Jacob, Latiolais combine for 41 points as Heath rolls over Beechcroft

HEATH, Ohio -- Despite being the higher seed, No. 7 Heath seemed more like the underdog from the outset in a home matchup vs. No. 8 Beechcroft in the Division II sectional finals. That would not be the case once the ball was tipped, as Heath relied on its senior core to blow past the Cougars, advancing to the district semifinals in a 74-55 statement win.

In a game that Heath won by 19 points, one would think the Bulldogs dominated from the opening tip, right? Wrong. Falling behind in an early 9-0 hole in the first few minutes of the opening quarter, Heath looked outmatched against a superior athletic team in Beechcroft. The Bulldogs would trail for the great majority of the first three quarters, not taking its first lead until the final minute of the third quarter, as senior guard Denton Jacob hit a three to put Heath ahead 45-44.

Going into the fourth quarter with a one-point lead, Heath would dominate the final eight minutes. Relying on its senior guard duo of Jacob and Aaron Latiolais, the two would spark a game-deciding 8-0 run in the first two minutes of the fourth quarter, putting Heath ahead 53-44 with 6:02 to go.

While Beechcroft would cut the lead to six on two occasions in the fourth quarter, Heath's senior would be too much, as Latiolais and Jacob scored on back-to-back possessions midway through the quarter, putting the Bulldogs ahead 59-48 with 2:21 to go.

Knocking down clutch free throws in the final two minutes and change, Heath executed its way to the district semifinals, despite being dominated on the glass. While Beechcroft had a size and athleticism advantage in Thursday's matchup, the Cougars struggled to execute in the half court after Heath switched to a zone defense.

On the opposite end of the spectrum, Heath cut down on turnovers in the final three quarters, while knocking down seven threes. Latiolais accounted for three of those triples, including back-to-back treys to open the fourth quarter in that 8-0 run for Heath.

Leading the way for the Bulldogs was Jacob, who walked off the floor for the final time at Heath as the program's all-time leading scorer. Jacob scored 22 points, scoring 11 in each half and providing consistency for the Bulldogs. Latiolais added 19 points, 13 of which in the second half. Senior wings Colton Huber and Mason Johnson added 19 points, while junior Treyton McCoy finished with 11 points off the bench.

For Beechcroft, junior wing Jelani Simmons finished with a team-high 14 points. Juniors Datrey Long and Therron Jennings each added 12 points, while senior wing James Richardson accounted for 11 points off the bench. No other Beechcroft player added more than two points.

With the win, Heath advances to take on No. 10 Linden-McKinley, who upset the top seed in the Worthington 2 bracket in No. 4 Bishop Hartley, 39-36.

Abdul Kanu went for 18 points and 10 rebounds as No. 2 DeSales rolled over No. 13 Centennial, 92-54. Caden Sanchez added 16 points for the Stallions, who advance to take on the winner of No. 3 Eastmoor Academy and No. 15 Independence on March 7.

Kyle Matoszkia scored 18 points as No. 5 Johnstown controlled No. 13 Granville at home. With the win, Johnstown advances to a third-straight district semifinal to take on the winner of No. 6 Bloom-Carroll and No. 11 Whitehall on March 7. 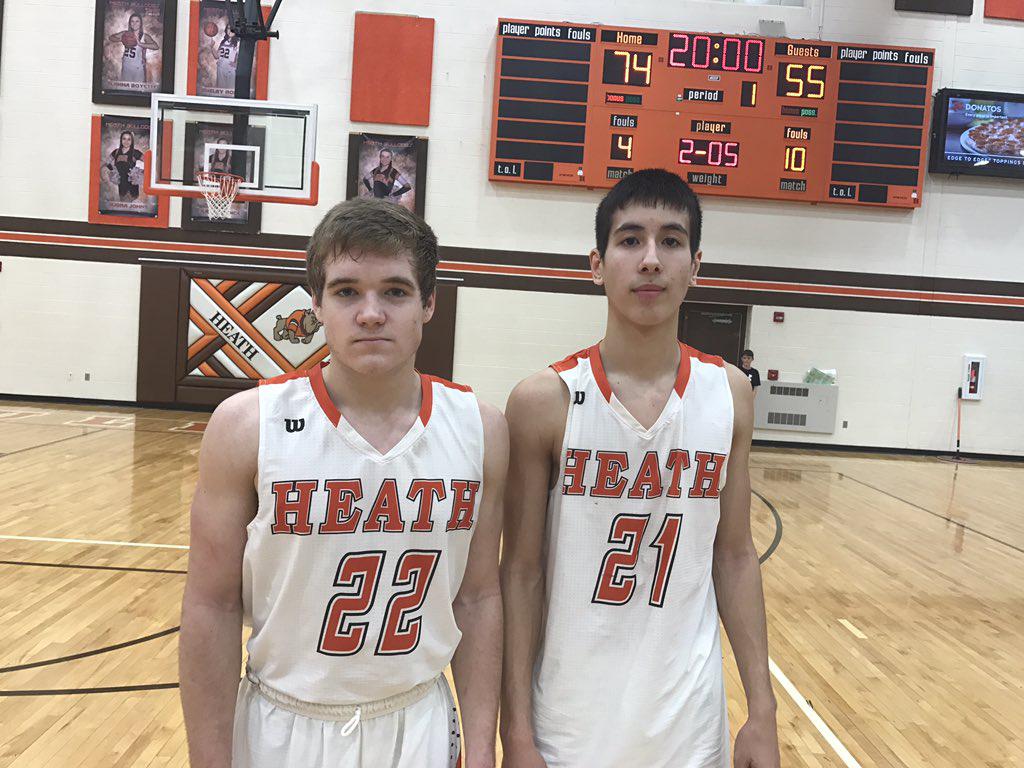