A look at our predictions for Tuesday's sectional final matchups

COLUMBUS, Ohio -- Win or go home. That is the reality of the district tournament and on Tuesday, 16 more teams in Central Ohio's Division I will face that truth in the sectional finals. With eight solid games on tap, let's take a look at our preview and predictions for each game.

No. 2 Newark will look to remain unbeaten against all teams not named Pickerington Central on Tuesday. Standing in its way is a No. 46 West team that is severely overmatched in this one.

West wins if: The Cowboys hit a barrage of threes and somehow find a way to shut down Newark.

Upper Arlington is looking to complete a run to a third district title in the last four years. Opposing them on Tuesday is No. 41 Hilliard Darby. Darby has had its ups and downs this season, with more downs than ups, but has played solid ball against some top competition at times. Upper Arlington should not take the Panthers lightly, even though the Golden Bears have the talent advantage in this one.

Upper Arlington wins if: Dane Goodwin has a typical Dane Goodwin night and his teammates knock down shots. A strong UA defensive showing should lead to a fairly easy win.

Hilliard Darby wins if: Dane Goodwin, Max Martz and Jordan Bailey are off. Combined with a big scoring performance from Jose Deleon.

Westerville South has not lost a Central District tournament game in nearly three years. That streak does not look to stop any time soon as the Wildcats take on No. 44 Big Walnut on Tuesday. Despite being the six seed, Westerville South got a drawing that reflected more of a first or second seeded team. With area programs still scared of Ed Calo and the Wildcats, Westerville South should have no problems advancing to the district semifinals.

Westerville South wins if: Kaleb Wesson comes out for warmups.

Big Walnut wins if: Westerville South is completely off and Big Walnut simultaneously knocks down a barrage of threes.

A battle of former OCC-Ohio foes tips off on Tuesday as No. 28 Lancaster heads to familiar grounds at No. 7 Groveport. While there is a big difference in seeding number, this game may be closer than what some could expect. Despite being winless in league play, Lancaster was 8-4 in non-league games against a fairly competitive schedule.

For Groveport, three of its four losses have came against the top two seeds in the tournament. The fourth? At home vs. Central Crossing, a team Lancaster handled on the road. Already matching up once this season, Groveport took care of business at home, 55-46 on Jan. 24.

Groveport wins if: The Cruisers have a solid shooting night, get Lony Francis involved on both ends and take care of the ball.

Lancaster wins if: Jacob Arter has a big game (like BIG game), Rocky Jorgenson competes underneath vs. Francis and the Gales take care of the ball and limit Groveport's chances in transition.

St. Charles returns to the Man Cave to take on a Tri-Valley team that might be much better than its seed. Winners of eight-straight games, Tri-Valley is one of the hottest teams in the tournament and takes on a No. 8 St. Charles team that struggled to put away No. 30 Briggs last Saturday.

In a game that should more than likely be low scoring, the team who is most efficient should take this one home. Do not be surprised if Tri-Valley finds a way to pull off an upset.

St. Charles wins if: The Cardinals use its height advantage and play high-low with Tavon Brown and Nick Muszynski. A strong night from Braden Budd along with its twin towers should do the trick for St. Charles.

Tri-Valley wins if: Jake McLoughlin dominates and the Scotties force turnovers in the half court. Tri-Valley will need to knock down the three ball at a high level to take down St. Charles.

The Battle of Dublin! It's finally here. After a potential 2015 district final matchup between these two teams never happened, we get it two years later. In 2015, Dublin Jerome was the lower seed of the two, jumping in the Coffman bracket for a chance to take on its rival to the south. This time around, Coffman was the underdog, jumping on the bye line to get Jerome in the second round.

With Dublin Jerome hosting Tuesday's mega-matchup, the game is expected to sell out hours before tip off. Jerome comes in after a dominating win over No. 24 Worthington Kilbourne on Saturday. Looking to take down its hated rival, the Celtics will need to be on its a-game against a Coffman team that has shown an ability to beat just about anyone, but also weakness where it could lose to just about anyone.

Dublin Jerome wins if: Its upperclassmen show up and show out. A strong performance from Zach Watson, Eddie Anders and Lucas House could be what the doctor ordered for a win. The problem with this matchup is that Coffman matches up with Jerome everywhere. The Celtics will need to be efficient.

Dublin Coffman wins if: The Rocks get it going from deep and limit turnovers. Jerome likes to run and get its transition going, so the Rocks will need to take care of the ball. A strong three-point shooting performance from Dominiq Penn and Nick Carlson, along with solid outings from Derek Van Vlerah, Trevor Grady and/or Will Hunter could be enough. Penn must not allow Jerome's senior guard Watson to speed him up.

In a rematch of a game that went to overtime in late December, No. 22 Thomas Worthington is looking for revenge at No. 13 Gahanna. For the Lions, Gahanna is coming off a come-from-behind win over No. 35 Mount Vernon, where it trailed for most of the contest. For Thomas Worthington, the Cardinals have not played in 11 days, but come in hot, winning four of its last five games. While Gahanna may have more talent and depth, Thomas Worthington has senior experience, which could be the difference. We see this one being a close game once again.

Gahanna wins if: Jordan Mitchell, Josh Corbin and Chase Rankin come ready to play. A big night from those three and contributions from its deep supporting cast should give Gahanna what it needs to advance to the district semifinals.

In a matchup of two programs that have surprised many in the area by finishing well above .500, one of the two will have to go home on Tuesday. Two senior laden units that are not looking to be done just yet, the matchup between No. 16 Dublin Scioto and No. 19 Mifflin should be a great one. Scioto has been the surprise team in the OCC this season, finishing 7-5 in a tough Cardinal division, while taking down Dublin Jerome on the road in the league finale. For Mifflin, the Punchers have been strong in the City League North, while playing great ball against OCC programs in non-league play, defeating Worthington Kilbourne and Westerville Central, while playing Grove City and New Albany tight.

Dublin Scioto wins if: Brandon Vertolli, Jackie Winchester and the Scioto supporting cast put up points. The Irish could choose to slow down the game and rely on its suffocating perimeter defense to make Mifflin uncomfortable.

Mifflin wins if: The Punchers can force turnovers, get its transition game going, while getting consistent production from its entire lineup. While not having one go-to scorer, four players are scoring between 9.0 and 9.7 points per game for the Punchers, which can either be a gift or a curse in the tournament. Itika Wynn and Bahati Haralson need to be hot for Mifflin to take this one. 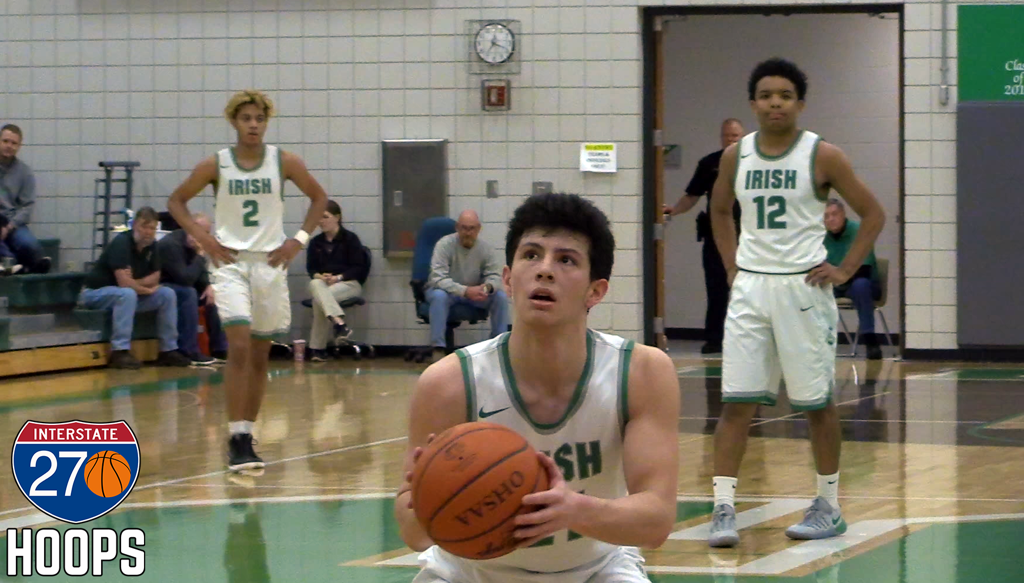 Vote now for the @270Hoops Player of the Week ‼️ You can vote once per day through Wednesday 🔥⤵️… https://t.co/bWOtda5q9h