COLUMBUS, Ohio -- The Jared Sullinger Scholastic Play by Play Classic lived up to the hype on Saturday at Ohio Dominican. With six games lasting all day long, spectators were in for a treat from start to finish. Let's take a look at the top performers from the event.

Sterling Manley (6'11 C / Pickerington Central / 2017): The North Carolina signee looked the part of a future ACC big man on Saturday in leading Pickerington Central to a big win over Northland. Manley controlled the paint, rebounding at a high level and finishing through contact around the rim. All in all, Manley led all scorers and rebounders, finishing with 21 points and 10 rebounds. It will be hard for most elite teams in Ohio to take down this Pickerington Central team when Manley is playing at the level that he showcased on Saturday.

BJ Duling (6'7 SF / Newark / 2017): On a team where Duling is forced to play the five, the elite wing forward steps up big time for Newark. On Saturday Duling was tasked with defending four-star Ohio State signee Kaleb Wesson of Westerville South. Duling won the individual matchup and the game, finishing with 22 points and six rebounds to lead the Wildcats to a 55-53 win over the defending state champions. Duling has been terrific all season long, using his elite length and athleticism to dominate opponents from eight feet and in, leading the Wildcats to a 17-0 start on the year. For Newark on Saturday, Duling came alive in the second half, scoring 16 points and helping the Wildcats stave off Westerville South.

Kaleb Wesson (6'10 C / Westerville South / 2017): Losing one game shy of the total from the last two seasons combined, Westerville South has struggled a little bit to match the expectations set by last year's graduating class. Through it all, one thing has remained consistent, however, and that has been Wesson. Once again on Saturday, Wesson looked like the top player in Ohio, finishing with 17 points and 13 rebounds in a losing effort. A terrific low post scorer who has as much touch as any player we have evaluated over the years, Wesson's increased athleticism and durability have made him a near impossible matchup for high school defenses. The Ohio State signee should be highly considered for the Ohio Mr. Basketball award, as he's dominated in every game this season.

Jeremiah Francis (6'2 PG / Pickerington Central / 2019): Francis has always been an imposing presence at the point guard position as he offers a certain of physicality, strength and change of pace that keeps defenses guessing. However, his biggest advancement this season has been his mental approach to the game. While Francis had a tendency to get sped up at times as a freshman, Francis has nixed that trait completely as a sophomore and has dominated since. With an IQ and feel for the game that has set him apart from opposing point guards, Francis has excelled and so has Pickerington Central. On Saturday, he was excellent once again, finishing with 15 points, five rebounds and three assists, while limiting turnovers and controlling the pace for Pickerington Central. When Francis is on his A-game and scoring at the level in which he did on Saturday, Pickerington Central is very tough to beat.

Gabe Towns (6'7 PF / Northland / 2018): Saturday was a great platform for Towns to have his breakout performance of the season in the area. Knocking down four threes and playing engaged basketball for long stretches on Saturday, Towns led Northland with 14 points against Pickerington Central. Hitting two early threes to help the Vikings jump out to a lead in the first quarter, Towns shot with great confidence on Saturday and played with high intensity. When Towns is scoring like he did on Saturday, Northland will be a tough out for anyone in the area.

JT Shumate (6'5 SF / Newark / 2018): While Duling is "the guy" for Newark, Shumate is a terrific complimentary piece that has enjoyed a huge breakout season for the undefeated Wildcats. On Saturday, Shumate made several key plays late that helped Newark take down Westerville South. Whether it's Shumate's hustle that helps him secure nearly every 50/50 ball or the clutch shots that he has been prone to hit over the last two years, Shumate has been as important as any Newark player this season. Shumate made his presence felt the loudest on Saturday when he hit a go-ahead three late in the fourth quarter after Westerville South tied the game in what seemed to be a shift of momentum for the defending state champs. The progression of Shumate through the rest of the season will have a big impact on just how far Newark can go.

Jordan Mitchell (6'7 SF / Gahanna / 2019): Most teams take on the mentality and attitude of its best player. For Gahanna, that is exactly the case and Mitchell was at his best on Saturday, which in tune helped the Lions play its best game of the season. Dominating Westerville North from start to finish, Gahanna flexed its muscle as its bench excelled for the entire game in addition to a strong performance from Mitchell. Mitchell finished with 15 points, 13 rebounds, five assists, two blocks and two steals, stuffing the stat sheet and imposing his will over the entire Westerville North team. When Mitchell is as engaged and active as he was on Saturday, there are not many better players anywhere in the state, regardless of class.

Braden Norris (6'0 PG / Hilliard Bradley / 2018): To be short, Norris was simply unconscious on Saturday, scorching the nets en route to a game-high 20 points and a 15th-straight win for the Jags. Knocking down six threes and helping Bradley spark a big second half run that put the Jags ahead, Norris led his team over a tough St. Charles squad that came in as winners of its last 12 games. With the ability to come off screens and off the bounce to bury deep threes, Norris and fellow freshman marksman Matt Allocco converge for a deadly backcourt that can get hot in a hurry for Bradley. The duo combined for 32 points, 30 of which from behind the three-point line.

Nick Muszynski (6'11 C / St. Charles / 2017): In a game where Muszynski's primary defender gave up eight inches to him, the Belmont signee dominated like he was supposed to. Finishing with 16 points and 14 rebounds, Muszynski was stellar on Saturday, creating several second chance opportunities on offensive rebounds. A strong finisher with extremely long arms and solid touch, Muszynski has really elevated his game since last season, as he has performed at a high level in all of St. Charles' big games this year. Muszynski is a double-double machine at the high school level.

Kayin Derden (6'3 SG / DeSales / 2019): When I say Derden is a deadly shooter, he is a DEADLY shooter. On Saturday, he was back to his old tricks, knocking down five threes to finish with 21 points in a dominating win for DeSales over Africentric. Derden has been arguably DeSales' top player in their biggest games this season, as he tends to rise to the occasion, as he has no lack for confidence with his jump shot that has been his go-to weapon this season. Look for the 2019 wing to rack up some recruiting interest this spring and summer following a breakout sophomore season.

Taevion Kinsey (6'4 SG / Eastmoor / 2018): Kinsey continues to impress this season as he was at his best in leading Eastmoor to a come-from-behind victory over Dublin Coffman. Finishing with a game-high 18 points and four assists, Kinsey was at his best in the first half, getting to the basket seemingly at will and knocking down two threes. Kinsey is an athletic specimen at the point guard spot for Eastmoor, as he excels at using his length to get to the basket, shooting especially well from the close and mid-range areas. As he continues to stretch his offensive arsenal and refine his skill set, Kinsey's stock will grow. 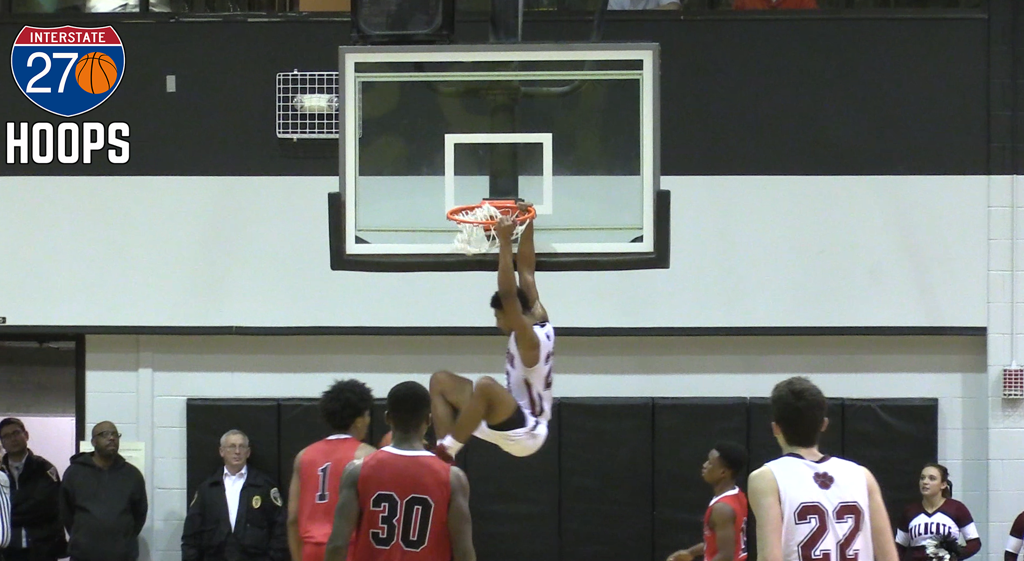