WORTHINGTON, Ohio -- After a competitive first half where both teams were knocking down shots and defending hard, Worthington Christian rolled past Grove City Christian in the second half on Thursday, outscoring the Eagles 48-22 in the final two frames on their way to a convincing 83-46 win.

With Grove City Christian coming out in a 2-3 zone, Worthington Christian quickly shot the Eagles out of it. Following two quick triples from Warriors senior guard Derrick Hardin, Grove City Christian answered with five straight points capped by a triple from senior Brayden Holbrook, but the Eagles were forced to burn a timeout and come out of their zone shortly after when Worthington Christian junior Drew Faieta buried the first of his six three's to put them ahead 11-7 five minutes into the contest.

Cutting the deficit to as little as 26-21 in the second quarter, Grove City Christian found life as they were hitting open shots and getting out in transition for some easy buckets.

Outscoring the Eagles 9-4 for the remainder of the half after this, Worthington Christian headed into the locker room ahead 35-24 after a buzzer beater from the mid-range by Hardin.

Forcing a multitude of turnovers and getting junior Kobe Buford going early in the second half, the Warriors put together a 20-5 run to start the third, forcing a Grove City Christian timeout as they led 55-29 with 2:12 left in the frame.

Cruising the rest of the way to the victory, Worthington Christian rode the hot shooting of Faieta and Hardin along with the play of Buford and senior Nakimba Mullins to secure the victory as they put together a masterful second half.

Scoring 14 points a piece, Holbrook and senior guard Gage Yanke led the way for Grove City Christian as they both put together nice showings on the offensive end. Fellow senior Koby Brunney added six of his own, while no other player scored more than three points for the Eagles.

They have another tough test coming up as they will hit the road on Saturday to open up MSL-Cardinal play against defending state champion Harvest Prep.

Leading Worthington Christian with 23, Hardin continued his hot start to the season while Faieta added 18 on six three-pointers, Buford scored 13 in his debut and Mullins chipped in with 11 points.

You can catch them again back in action next Monday at Bloom-Carroll, as they expect to ease star sophomore guard DJ Moore back into the rotation starting next week. 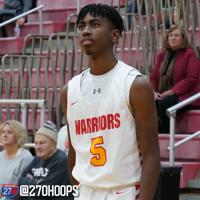 Derrick Hardin (6'0 WG / Worthington Christian / 2020): Leading Worthington Christian with 22 points on Thursday, Hardin continued his hot start to the season. The senior knocked down five triples efficiently both off the catch and off the dribble, hit a mid-range off the dribble and created some easy looks in transition by staying active in the passing lanes. The lefty has a quick trigger and does not need much space to get his shot off as we saw him shoot Grove City Christian out of their 2-3 zone early on in the first quarter. We liked the reads Hardin made passing the ball as well as he made some good outlet passes, had some high IQ drive and kick reads and made the extra pass to find open teammates for easy buckets when the opportunities presented themselves. We're excited to see the type of numbers Hardin puts up this season as he's a lights out shooter who can do things off the dribble when needed to as well. He would be an excellent look for high level Division III programs in need of shooting and offensive production. 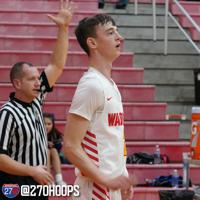 Drew Faieta (5'10 WG / Worthington Christian / 2021): Coming off of the bench to knock down six three's to the tone of 18 points for Worthington Christian, Faieta was excellent on the offensive side tonight. The lanky junior has a really quick, smooth release and is very efficient from beyond the arc. He did an excellent job of making the extra pass on offense as well, setting up his teammates for several wide open looks and not forcing any bad shots for himself. We like the instincts he plays with on the offensive end, as he always seems to know what play to make next just a step ahead of the defense. On the defensive side of the ball, Faieta can frustrate guards in Worthington Christian's full-court trap defense despite not being the quickest as he offers length at just 5-foot-10 and plays the passing lanes very well. On a team full of guys who can get their own shot, Faieta will play a big role for Worthington Christian this season as he'll get a ton of open looks from three-point land thanks to guys such as DJ Moore, Kobe Buford and Derrick Hardin. 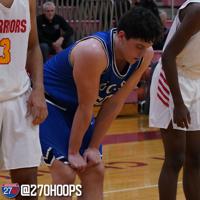 Brayden Holbrook (6'2 WG / Grove City Christian / 2020): Putting together another impressive showing on Thursday, Holbrook led Grove City Christian with 14 points and scored on the offensive end in a variety of ways. While he was more of a shooter last season, the senior added some real strength in the offseason, as he can do a much better job of attacking off the dribble and creating room for his own shot now. We saw him hit a pair of three's off the catch, get to the rim for an easy finish and hit a tough stepback jumper from the mid-range. We liked the reads he made off the dribble, as on one occasion he made an excellent kick to the corner for an open three after beating his man off of the dribble and going baseline. He made several good passes throughout the course of the game as he attracts a lot of defensive attention and can get his teammates open. On a Grove City Christian squad where he has to create a lot on his own, we expect Holbrook to enjoy a big season this year where he should put up some really good scoring numbers in the MSL-Cardinal. 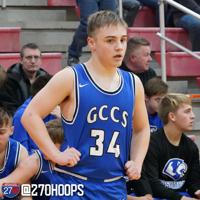 Gage Yanke (5'9 WG / Grove City Christian / 2020): Also adding 14 points for Grove City Christian on Thursday, Yanke was efficient on the offensive end as he didn't take many bad shots and converted on most of his looks. He knocked down a mid-range off the dribble, hit a nice floater with his left hand, had a good soft touch finish just outside of the lane while driving right and converted on a few easy lay-ins where he positioned him self well around the rim. The senior has a good basketball IQ, as he seemed to make the right play in nearly every situation on Thursday, throwing good outlet passes, finding a trailing man for an open three and making some good passes in the face of the Worthington Christian defense. We expect a good season from the senior, as he's tied as the Eagles' leading scorer through two game so far this year.