Bulldogs pressure defense and athleticism too much for St. Charles in a big non-league showdown

COLUMBUS, Ohio -- In a game of runs on Wednesday night, South used their hectic pressure defense and a big third quarter outburst to take down St. Charles, beating the Cardinals 69-58.

After South scored a few easy baskets in transition and jumped out to an early 9-3 lead in the first two minutes, St. Charles quickly answered.

Catching fire from outside and forcing turnovers in the passing lanes, the Cardinals finished the quarter on a 17-5 run to take a 20-14 lead after one. Sophomore guard Derrick James was set the tone early, coming up with several steals, hitting a three and finishing a tough and-one.

Turning up the defensive pressure and making better decisions on the offensive end in the second quarter, South dominated the frame. Following a big and-one, South senior Marcus Johnson ignited the crowd by throwing down a huge dunk from fellow senior Trevell Adams  to force a St. Charles timeout and claim a 31-27 lead.

Taking this momentum into the locker room, South led the Cardinals 34-29 at half.

The Bulldogs quickly answered, however, as several nice finishes from Adams and senior Taquan Simmington sparked an 8-0 run to push their to lead to 10 as they seemed to be in control, leading 46-36 with 3:13 left in the quarter.

Quickly answering with six straight points and forcing a South timeout, St. Charles cut the deficit to just 46-42 late in the third before a pair of South buckets gave the Bulldogs a 50-42 lead heading into the final frame.

Carrying over the momentum from a Marquis Hawthorne jumper to end the third, South finally created the separation they needed early on in the fourth quarter. Increasing their lead to as much as 14 points following an and-one from junior Maurice Barnes Jr, the Bulldogs cruised in the final frame, securing an impressive victory in front of the home crowd.

Leading the way for St. Charles with 17 points, sophomore Jared Frey had an impressive showing, while James contributed 12, Ryan Utt scored nine on three triples, and freshman Chase Walker and senior Vic Searls each pitched in with eight in the loss.

St. Charles will be back in action tomorrow night as they take on East on the road.

For South, Johnson led the way with 22 points, while Taquan Simmington scored 10, Adams had nine, Sam Barton pitched in with nine, and Barnes scored eight off of the bench.

You can catch them again next Tuesday as they will be on the road to open City League play at Eastmoor. 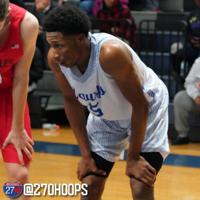 Marcus Johnson (6'4 WG / South / 2020): Putting together an excellent showing on both ends, Johnson led South with 22 points tonight and put all of his tools on display. The senior wing is about as good as they come on the defensive perimeter, as he sat down on St. Charles guards all night and also forced them into a handful of bad decisions with his length, intensity and lateral quickness while trapping. He got out in transition for easy buckets on several occasions, got to the rim off the dribble, and hit a mid-range pull up off the bounce. We liked the moves Johnson used to get in the lane tonight, showing off his smooth handle and ability to absorb contact as he got to the free throw line and converted on several occasions as well. With an elite combination of motor, athleticism and defensive equity, Johnson is a prospect that low-major Division I's should take a look at, as he has heard from HBCU's such as Bethune-Cookman and Florida A&M recently and can score from all three levels on offense as well. 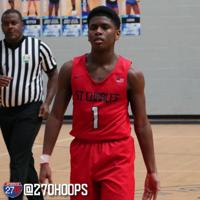 Derrick James (5'8 PG / St. Charles / 2022): James had a very good showing tonight, especially in the first half, as the sophomore played with no fear against one of the best backcourts in the entire state. He created a couple of easy buckets by forcing turnovers in the passing lanes, hit a spot-up three and hit a mid-range jumper off the dribble. The 5-foot-8 guard has a very slippery handle, can get to the rim at ease, and showed a good knack for finishing through contact tonight as he came up with a pair of and-ones amongst the big boys. We love the way James competes as he defends hard, makes good decisions with the ball in his hands, and is a very good passer at such a young age. Though St. Charles struggled to handle South's pressure at times tonight, James rarely turned it over, using great composure and not forcing things on the offensive end. Between him and Jared Frey, the Cardinals will have one of the best backcourts around for the next three years as they both produce night in and night out at such a young age and are only continuing to improve. 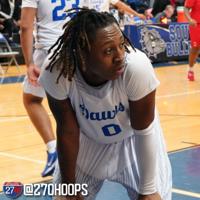 Taquan Simmington (6'2 WG / South / 2020): Putting together a masterful performance on the defensive end tonight, Simmington came up with five steals to go along with a 10 point outing as he forced St. Charles' guards into poor decisions all night and created a handful of easy buckets for his team in transition. The senior got to the rim for a few tough finishes through contact as well, using his brute strength and ability to attack off the dribble to create space around the rim and come up with some good looks. Simmington seems to improve as a decision maker every time we see him as well, as he dropped off several high IQ passes tonight, didn't take any bad shots and was very efficient from the field. Between he and Johnson, you will not find a more frustrating defensive backcourt to go up against in the entire area, as all of the Bulldogs guards get after it on the perimeter and make life a living hell for opposing ball handlers. 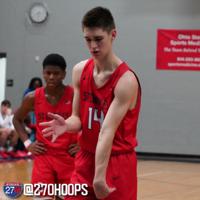 Jared Frey (6'4 WG / St. Charles / 2022): Leading St. Charles in scoring with 17 points, Frey was his usual self on the offensive end tonight as he knocked down three triples and scored in a variety of ways. We liked the way he attacked off the dribble, making several good drive-and-kick reads to open shooters and attacking from the right side of the floor on multiple occasions, showing a really valuable ability to finish around contact with his off hand. We're excited to track the sophomore for the next three seasons, as he offers length, handling ability and knockdown shooting in an era where all three of those things are valued just about as much as anything. 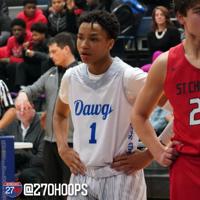 Maurice Barnes (5'11 G / South / 2021): The first guy off of the bench for South tonight, Barnes was excellent as he overcame a slow start and made some really big plays for the Bulldogs throughout the course of the game. The junior really knows his role as he makes excellent reads on defense, makes the extra pass and simply plays hard at all times. He got to the rim on several occasions tonight, absorbing contact and getting to the line as well as finishing around the rim. We really loved how he made the correct traps on defense, knowing what to do within the system and giving South some really valuable minutes off of the bench. Barnes showed good vision tonight as well, staying a step ahead of the defense and creating several easy buckets for his team both in the half court and in transition. The junior will play a big role for South this year as he'll be relied on every night to bring energy off of the bench, especially when the Bulldogs guards get into foul trouble. 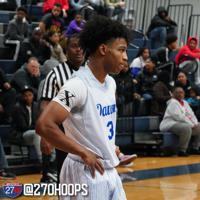 Trevell Adams  (6'0 PG / South / 2020): Adams has went from the sixth man of last year's state runner-up team to the unsung leader of South over the last eight months as he's a leader on the court with both his play and voice. The senior was very good once again on Wednesday, making some really nice passes to the tune of five assists, pressuring the St. Charles' guards into bad decisions and also scoring near the rim off the dribble on several occasions. Adams has elite level athleticism and is stronger than your average lead guard, allowing him to get in the paint at will where he is a really good decision maker. Though he didn't attempt many jumpshots tonight, Adams has that in his bag as well as he's really improved that area of his game recently to go along with a really, really tough floater. Division II programs should be all over the senior as he's going to a be a huge steal for somebody in the years to come.

‘21 Garner Wallace shoots a left handed hook in transition to bring the game to a 5-4 Westerville South lead with 1… https://t.co/TgSqEJp0xz

The ball has tipped here in Pickerington