COLUMBUS, Ohio -- In a battle between two teams on the opposite end of the experience spectrum, Centennial overpowered Hilliard Davidson in its opener, 68-58.

While the Stars have a great deal of experience returning on its roster, the visiting Wildcats had just seven points of total scoring from last year's district runner up squad that returned to the floor on Monday.

That might have been the difference in the non-league tilt on Bethel Road, as Centennial survived a slow start and used a major second half to power past Davidson.

Centennial was led by juniors Travonne Jackson and Jaylen Gilbert, who combined for 42 points. Outside of its junior duo, the Stars got plenty of all-around production from its supporting cast, as guards Jaylon Jackson, Tyreek Gunnell, Ahmed Dada, Luchene Davis and Syquee Womack provided valuable contributions on the defensive end of the floor.

For Hilliard Davidson, the young Wildcats' turnover woes and shaky free throw shooting in the fourth quarter came back to haunt them. The Wildcats were led by 14 points from junior Graham McClellan, who came off the bench and knocked down a game-high three triples. Junior guard Jayden Humphrey and sophomore guard Ryan Paris each added 11 points for the Wildcats.

Centennial will look to keep winning as it opens up City League North play next Tuesday at home against Beechcroft.

For Hilliard Davidson, the Wildcats will have to bounce back quickly as they open up OCC-Central play on Friday against rival Dublin Coffman. 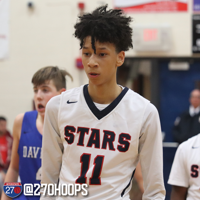 Travonne Jackson (6'5 WG / Centennial / 2021): It seems like every time we see Jackson, he grows another inch. Standing at a legit 6-foot-5, Jackson scored 14 of his 20 points in the second half to power Centennial. The 6-foot-5 guard is a slippery ball handler who creates his own shot better than any player on his team. Jackson did more than score on Monday, as he added a game-high 12 rebounds, helping Centennial shut off second-chance opportunities for Davidson in the second half. If Jackson can add weight and become a bit more explosive, he will develop into one of the best wing prospects that the City League has to offer, as he already possesses intriguing ball skills and dexterity with his lanky and expanding 6-foot-5 frame. 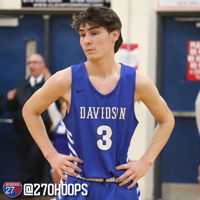 Graham McClellan (6'3 WG / Hilliard Davidson / 2021): Coming off the bench, McClellan made his presence made instantly by knocking down a trio of catch and shoot triples to power the Wildcat offense. Offering solid length, McClellan will serve a vital role for this Davidson team, as he led the team in scoring with 14 points. Look for Davidson to run McClellan through plenty of screens this winter to get him open, as he showed the best ability to knock down catch and shoot jumpers out of any player in Monday's game. 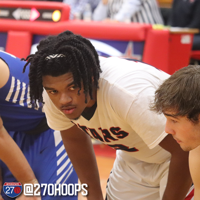 Jaylen Gilbert (6'3 PF / Centennial / 2021): A few weeks removed from leading Centennial to its first-ever state football playoff berth, Gilbert was back to his usual, physical big body self in the win over Davidson. Coming alive in the second half, Gilbert scored 18 of his 22 points after halftime to power the Stars to a win. While his future is on the gridiron as a bruising dual-threat quarterback that powered a high-scoring Centennial offense, Gilbert is a quality high school basketball player that impacts a game with his toughness and ability to score through contact. With two years of double-digit scoring varsity experience under his belt already, look for Gilbert to help Centennial compete atop the City League North once more this winter. 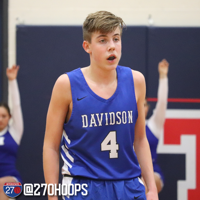 Ryan Paris (6'1 PG / Hilliard Davidson / 2022): A player who jumped on our radar at the first annual The Intro in 2018, it was nice to see Paris in his first varsity action of his career. The 6-foot-1 guard is one of the more deadly shooters in the area, even though he struggled to convert on Monday. Going up against a Centennial team with a handful of tough, physical guards who put pressure on the ball, Paris handled that pretty well, limiting turnovers and helping Davidson get into its offense. We love the confidence and toughness that Paris plays with, as we see him having a chance to become one of the best guards in the OCC-Central within the next two years. 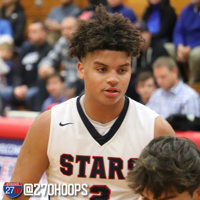 Jaylon Jackson (5'10 PG / Centennial / 2021): In our two viewings of Jackson in the last nine days, we have grown to love his game. The 5-foot-10 guard does everything that a coach could want on the defensive end of the floor, pressuring the ball as well as any player we've seen thus far in the early season. Jackson maintains great defensive positioning, both on and off the ball, as he is rarely out of position and always seemingly in the right spot on help side defense. On the offensive end, Jackson handles the ball well, sets teammates up for open scores and always makes the correct read. The next step for Jackson to evolve as a player is to become a more consistent outside shooting threat, as he could offer some real 3&D value at the next level with how advanced he is on the defensive end. 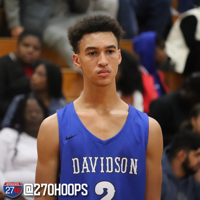 Jayden Humphrey (6'0 WG / Hilliard Davidson / 2021): A player that we watched for the first time on Saturday, Humphrey impressed as a scorer, using his pull-up jumper early and often on Monday. On a Davidson team that will score by committee, Humphrey is primed to step into a primary scoring role in the backcourt alongside Paris. We liked the feel and IQ that Humphrey showed, as he should become a vital part of this program as he gets more game experience in an OCC Central division that is up for grabs this season.

There’s an intriguing non-league matchup going down at New Albany as the upstart Eagles host a talented Reynoldsbur… https://t.co/NBYSq7Pvuh

Staying in the OCC, we have another intriguing non-conference battle between unbeaten Gahanna and defending regiona… https://t.co/Gs6EeKjZxP

In the OCC, a yearly non-league battle has turned into a Top 10 showdown Westerville South is hot and rolling as… https://t.co/6IyRNt2EIN