WORTHINGTON, Ohio -- A potentially successful season for Briggs might have been sparked by its JV team. Trailing by two points with 25 seconds remaining, the JV squad went for the final shot. With the ball in the hands of Clinton Bryant, the sophomore stepped up big time and drilled a game-winning three from the top of the key to power the JV Bruins to a 60-59 victory.

With its varsity squad watching courtside, the Bruins' top players erupted after the shot and brought that same energy to the floor for the 7:30 p.m. tip.

Playing a complete game and dominating for the first 10 minutes, Briggs held off a late rally from Kilbourne to hang on to a 59-55 victory on the road.

Coming out in a suffocating zone defense and relying on the playmaking of senior point guard Dom Farley and the hard work of senior forward Andrew Grubbs, Briggs held Worthington Kilbourne without a field goal in the first quarter.

Leading by as much as 16 points at 19-3 in the second quarter, Briggs controlled the entire first half despite a late rally by the host Wolves.

Heading into halftime with a 22-12 lead, Briggs remained strong in the second half.

With Worthington Kilbourne zoning in on stopping the hot-shooting Farley, the senior guard went into facilitator mode, setting up teammates for countless scores as the Bruins won the third quarter 17-12.

Leading by 15 points after three, Briggs seemed to be in business against a Kilbourne squad that couldn't find any sort of scoring outside of junior wing Ian Schupp. All that changed in the fourth quarter, as the Wolves caught fire from beyond the arc and scored 31 points in the period to climb all the way within two points with 6.5 seconds to go.

A three from junior Blake Gardner put the Wolves in its best position to at least force overtime, however, the Wolves were forced to put the last person it would have wanted on the line.

Fouling the sure-handed Farley with a few ticks left on the clock, Kilbourne hoped the senior guard would fall short in a game where he carried the Bruins all the way through.

Calmly knocking both the pair of free throws at the line, Farley capped off a brilliant performance with 19 points to lead Briggs to a big 59-55 victory on the road.

Farley set the tone in the first half with his three triples, however, he impressed as a playmaker and passer in the second half. Finishing with 19 points, Farley got his teammates involved as two other Bruins finished in double figures.

Grubbs added 12 points and a handful of key hustle plays, while junior forward Javion Williams capped off a strong night with 10 points and 10 rebounds.

Briggs will look to improve to 2-0 as it heads to west side rival Franklin Heights on Tuesday at 7:30 p.m.

For Kilbourne, sophomore guard Ayden Parsons led all scorers with 16 points. While a bit limited in the first half, Parsons caught fire in the final two frames to help the Wolves claw back.

Kilbourne will look to bounce back as it takes on Bishop Watterson on Tuesday at 7:30 p.m. 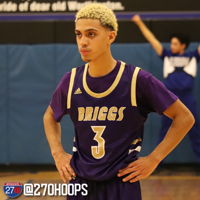 Domenic Farley (6'1 PG / Briggs / 2020): We remember the first time we watched Farley play basketball. It was in December of 2016, when Farley was running the point for West against Dayton Meadowdale. While his team was outmatched, we were impressed with Farley's ability to handle pressure and get places off the dribble. In the three years since, Farley has changed schools and added a ton to his game. Evolving as a point guard, Farley is much improved from that first viewing, as he was the best player on the floor in Briggs' road win. The 6-foot-1 guard has a tight, slippery handle that he used to make defenders dance all night. Any time he sensed any bit of separation, Farley showed off his quick trigger from the perimeter, knocking down a handful of triples, both off the bounce and off the catch. More impressive, however, was Farley's ability to set the table for his teammates. Playing turnover free basketball for the most part, Farley delivered pinpoint passes on the move, making the correct reads and setting his teammates up for scoring opportunities. While he could have easily forced bad shots, Farley played with great composure and intelligence, moving the ball when he needed to move it and scoring when he needed to score it. The 6-foot-1 senior also happens to be a great student, which makes him virtually recruitable by any small college. Division III and NAIA programs should put Farley on their recruiting lists, as he's a tough kid who plays to win, while having game-changing scoring ability from beyond-the-arc. 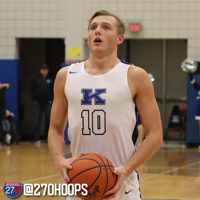 Ian Schupp (6'5 WG / Worthington Kilbourne / 2021): As far as prospects in Friday's game, Schupp might have the best long-term potential of them all. At a long 6-foot-5 with broad shoulders, Schupp is a physical imposing wing with great athletic tools. We loved the explosiveness that Schupp showed off the bounce, finding space to get into the lane where he finished at a high level. The 6-foot-5 wing knocked down a pair of threes in the second half to finish with 15 points. While his outside shot is the weakest part of his game right now, Schupp showed the ability to at least be respectable from the perimeter, while having the ability to attack a defense and take advantage of slower forwards on the wing. We look forward to watching Schupp develop, as he has a chance to be the first Kilbourne prospect to earn a basketball scholarship since we began covering the area. 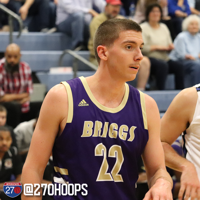 Andrew Grubbs (6'4 WF / Briggs / 2020): For a kid that has played all four years for the Bruins and went through plenty of adversity along the way, it was really nice to see Grubbs play at a high level for 32 minutes. The senior forward did all the little things that lead to victories, serving as the Bruins' glue guy in a tough win. Grubbs set the tone with his motor, grabbing three offensive rebounds, taking a charge and blocking a shot in the first quarter. That effort eventually led to offense, as Grubbs constantly took advantage of mismatches on the perimeter, beating his defender off the bounce and finishing at the rim a few times. The 6-foot-4 senior even knocked down a three in the second half and cleaned up second chance opportunities. Grubbs is a hard working kid who plays the game the right way, as we think small colleges should take a look at the senior who wants to major in criminal justice. 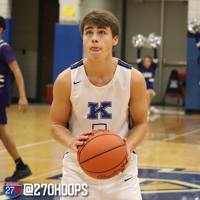 Ayden Parsons (6'0 PG / Worthington Kilbourne / 2022): While nothing could go in for Kilbourne in the first half, Parsons helped the Wolves bounce back in a 31-point fourth quarter for his team. The 6-foot guard sets the table offensively, getting the Wolves into their offensive sets. While he's a knockdown three-point shooter who can also attack a defense off the bounce, Parsons is an intelligent passer that can make plays for others. We liked how he helped Kilbourne attack Briggs' zone in the second half, finding weak spots which led to open shots. After playing in nearly every game last year as a freshman, Parsons has a great career ahead of him at Kilbourne. 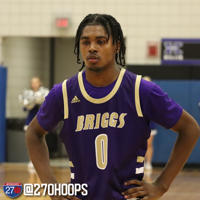 Javion Williams (6'5 PF / Briggs / 2021): With Farley missing half of last season due to transfer rules, Williams was thrust into a primary scoring role as a sophomore. As the senior guard Farley is good to go for the entire year, Williams has shifted into a glass cleaning, post eating role for the Bruins as a junior, something we think he's really equipped for. In Friday's matchup on the road, Williams dominated on the glass, cleaning up the defensive boards and scoring through contact in the second half. The 6-foot-5 forward works hard around the basket, is not afraid to throw his body around and provides some much-needed toughness up front for the Bruins. We liked the energy that Williams brought in the second half, as he controlled his temper and helped Briggs close out a surging Kilbourne. If Williams can stay out of foul trouble and continue to play with the effort and toughness that he brought on Friday, Briggs will be able to compete in any game it plays in this season.