DELAWARE, Ohio -- Rivalry renewed.  Despite heading into the fourth quarter trailing five points and failing to claim a lead the entire game, Buckeye Valley saved their best for last on Friday night, using a dominant defensive performance in the final 13 minutes to take down rival Delaware Hayes in overtime, beating the Pacers 52-45.

After Buckeye Valley senior Max Stokey got the Barons on the board, Delaware quickly responded. Following a score inside from senior Paul Burris, fellow seniors Nate Griggs and Addison Harvey made plays of their own to get the crowd ignited as Griggs came up with a big and-one followed up by a triple in the corner from Harvey to give them an 8-2 lead early on.

Opening up the second quarter on a 10-3 run, the Pacers increased their lead to as large as 21-10 as Burris had a handful of tough buckets around the rim, including an acrobatic up-and-under for an and-one.

Buckeye Valley quickly responded with five points of their own to trim the deficit to six at 21-15 before ultimately heading into the half trailing 23-17 after the teams traded buckets before the buzzer.

After a slow start to the second half for both teams, Buckeye Valley got on the board first with an easy lay-in before Delaware rattled off five quick points capped off by a corner three from senior Ryan Smudz to give them a 30-22 lead with 1:39 left in the third quarter.

Turning it up in the fourth quarter, Buckeye Valley began to force turnovers and create easy looks in transition. Following a tough lay-in in the open floor and a three-pointer from sophomore Troy Scowden, senior guard Dylan Herbert threw down a big dunk in transition to turn up the crowd and cut the Delaware lead to 33-30 with 6:27 remaining.

Regaining some of their momentum, the Pacers pushed their lead back up to four at 36-32 before calling a timeout with 4:56 to go. Unfortunately for Delaware, the wheels fell off the bus after this.

After the Barons cut the deficit to just two, sophomore Owen Osborne hit one of the biggest shots of his young career, knocking down a three from the wing to put Buckeye Valley ahead 37-36 with 1:31 to play. Shortly after, fellow sophomore Jevin Beard knocked down one of two at the line to push the lead to 38-36 with a minute to play.

Knocking down a pair of crucial free throws, Burris tied the game at 38 for Delaware late before a missed three at the buzzer from Herbert sent the contest into overtime.

Playing absolute lockdown defense in the extra period, Buckeye Valley went on an 8-0 run to take all of the energy out of the home crowd and grab a 46-38 lead late. The Barons didn’t allow a point in overtime until there were 32 seconds left and did an excellent job at the line, executing big time down the stretch.

The Pacers finally hit a few shots late in the frame, but it was far too late at that point, causing them to suffer a devastating opening game loss to their rival.

They were led by Burris and Smudz with 15 each, while Harvey added eight and Griggs scored four. You can catch them back in action on the road Tuesday in a tough matchup at Olentangy Orange.

For Buckeye Valley, Scowden led the charge with 19 points, 14 of which came in the second half. He was followed up by Osborne and Beard with eight points a piece, while sophomore Dylan Thompson added seven and Herbert scored six. They will play their first ever MSL-Ohio game next week as they host Wellington on Tuesday. 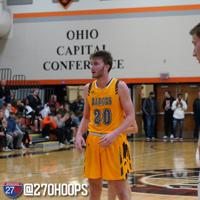 Troy Scowden (6’6 PF / Buckeye Valley / 2022): After a rather slow start, Scowden dominated the second half, showing us all of his offensive tools. The 6-foot-6 forward has broad shoulders, isn’t afraid to push guys around and knows how to create open looks inside. He showcased a smooth post spin move on several occasions tonight and used a really soft touch to score in the paint. We were most impressed with his ability to stretch the floor tonight as the big man hit two three’s in rhythm off the catch and looked very fluent doing it. The sophomore also showed off some handling ability as he went coast-to-coast off a steal for a smooth finish in transition through traffic. Scowden affects the game on the defensive end as well as he has the length to alter shots inside and is a solid interior defender with his build and size. We like the tools Troy brings to the table and were impressed with his poise on the big stage tonight as he hit some big free throws and made some crucial plays for his team in the second half. We’re excited to track Scowden this season as he’s the most talented player on a Buckeye Valley team who has a real shot to make some noise in the Division II tournament. 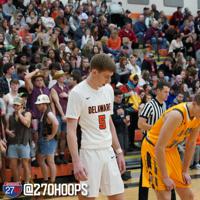 Paul Burris (6’6 WF / Delaware Hayes / 2020): Burris had an efficient showing tonight as the senior came up with some impressive buckets near the rim. At a very long 6-foot-6, Burris has no problem getting his shot off inside and showed really good touch around the rim on multiple occasions tonight as he knocked down a floater and a tough post turnaround. We liked the way Paul attacked off the dribble as well tonight. He did an excellent job of absorbing contact and finishing through it, which was most evident on an acrobatic up-and-under and-one he had in the first half. Burris has added some strength since last season and has the length to alter shots inside, but still needs to add a little bit of muscle in order to become a force on the defensive interior. As we’ve grown used to seeing him as a spot up shooter, tonight was a really impressive showing for Paul as the Ashland commit didn’t hit a single three but rather scored all of his points inside and off the dribble. We’re excited to see what kind of numbers he puts up this season as he will be the go-to guy for Delaware when they need a big bucket. 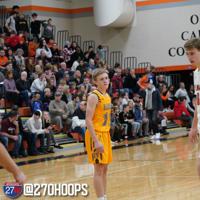 Owen Osborne (5’9 PG / Buckeye Valley / 2022): Osborne put together an excellent game off the bench for the Barons tonight. Though he may be a little undersized at 5-foot-9, the sophomore handled the Delaware pressure excellently all night long, rarely turning the ball over and consistently making the right read in the half court. Osborne made several good passes leading to easy scores, dove for loose balls and defended hard throughout the entire contest. He also knocked down two three’s off the catch, one to take the lead late in the fourth, showing off a smooth stroke from beyond the arc. Owen plays the right way as he does what is asked of him and simply wants to win, which will make him a vital piece to this Buckeye Valley team off the bench this season. 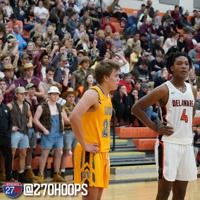 Jevin Beard (6’0 G / Buckeye Valley / 2022): Another talented young guard for Buckeye Valley, Beard plays with a motor that simply never stops running. Despite being just 6-feet tall, the sophomore made his presence felt on the glass tonight, constantly moving guys around in the lane and fighting for extra possessions on the offensive end. Beard didn’t light it up in the scoring column, but hit some big free throws down the stretch and forced contact after getting into the lane on multiple occasions. Late in the fourth, Jevin made a play that truly summarizes what he brings every night as he ripped away a rebound from a Delaware player with Buckeye Valley up one and got to the line to increase their lead to two. If this didn’t happen, the Barons would’ve had a sad ride home tonight as they would’ve dropped the contest by a point rather than sending it into overtime. We love the way Beard plays and can’t wait to watch him for the next three seasons. 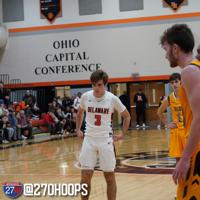 Addison Harvey (6’0 WG / Delaware Hayes / 2020): Harvey had a solid two-way showing tonight as he slowed down Buckeye Valley senior Dylan Herbert the entire night with his excellent defense and made some impressive reads on the offensive end. Harvey doesn’t force things, but instead takes what the defense gives him. We saw this multiple times tonight as he had a few nice passes into easy scorers after getting past his man and into the lane off the bounce. The senior also had a tough and-one through contact and hit a three on the offensive end, showing off a scoring arsenal that you need out of a guard who is your number three option. Harvey would be a good look for Division III programs in need of a high IQ guard who will put the team first and make others around him better.