WESTERVILLE, Ohio -- After a slow first quarter where they struggled to knock down open shots and establish a rhythm, Gahanna turned it up on Westerville North in the final three quarters on Wednesday, outscoring the Warriors 54-31 in the last three frames en route to a convincing 63-43 win.

Despite Gahanna junior Jarious Jones scoring the games first bucket, Westerville North got off to a scorching start. The Warriors jumped out to a 10-2 lead after a 10-0 run behind a few big buckets from senior forward Charles Perkins. They made the Lions uncomfortable on the offensive end early, blocking several shots and altering others.

Perkins was very impressive throughout the night, finishing at a high rate around the rim, providing energy and bodying guys around down low.

Gahanna responded before the end of the quarter, however, as a big and-one from senior guard Phillip Pontious helped the Lions. They never looked back after this as they began the second quarter with back-to-back triples from sophomore Sean Jones and senior Nate Staib to take a three point lead that they wouldn’t lose for the rest of the night.

Perkins came up with a big and-one for Westerville North to tie it at 23 with 2:03 left in the first half, but Gahanna won the final two minutes after that, outscoring the Warriors 7-2 and taking a 30-25 lead into the locker room after a big-time three right before the buzzer from Staib.

Coming out of the break with a vengeance, Jarious Jones reeled off seven straight points for Gahanna on three tough finishes, one of which was an and-one, extending their lead to 10 points at 37-27 with 5:46 left to play in the third. Despite having a rather quiet first half, the junior put all his tools on display in the final two quarters, using his length to disrupt ball handlers, play the passing lanes and finish inside efficiently.

The Warriors cut the lead back down to five shortly after as Perkins scored five of his own in a row to cut the lead to 37-32 with 4:25 in the third. Unfortunately for Westerville North, this was as close as they would get for the rest of the night.

Gahanna ended the third on an 11-2 run as they turned up the pressure in the fullcourt and made Westerville North uncomfortable every trip down the floor, leading to several turnovers and easy scores in transition.

Taking a 48-34 lead into the third, the Lions cruised the rest of the way, extending their run to 22-6 and claiming a convincing 59-38 late before taking their starters out for the final couple of minutes.

Despite falling apart in the second half, Westerville North showed some good signs tonight. Perkins was their best player as he led them with a game-high 16 points and was very efficient around the rim. His brother, fellow senior Chace Perkins, followed up with eight points but was most impressive on the defensive end as he gave Sean Jones some problems early on in the contest and did an excellent job playing the passing lanes.

They will be back in action next Friday as they take on cross-town rival Westerville Central to begin OCC-Buckeye play.

For Gahanna, the Lions were very impressive in the second half as all of their guards caused havoc defending 94 feet and hit open shots when needed. They were led by Sean Jones with 14, while Jarious Jones added 13 and senior Zane Leitwein scored 10.

Pontious added nine points, while sophomore Javan Simmons scored seven and Staib added six for the Lions, who are back in action Saturday night at home against Beechcroft in the All-Ohio Showcase. 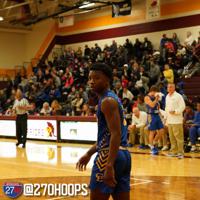 Sean Jones (5’11 PG / Gahanna / 2022): Even though tonight wasn’t a dominant showing from Jones, the sophomore was arguably still the most impactful for player for Gahanna as he led the Lions with 14 points, controlled the pace of the game and created a ton of open looks on the offensive end for both himself and teammates. The 5-foot-11 guard has as tight of a handle as they come in the area, beats guys off the dribble time and time again and consistently make the right read, whether it’s adjusting his lay-in or throwing a dime to the corner in mid-air. He has continued to improve as a jump shooter recently and we saw that on full display tonight as he hit two three’s, one off the catch and one off the dribble, and hit a pair of pull-ups in the mid-range as well. We love the way Jones defends the ball on defense as well, as his elite lateral quickness and active hands on that end allow him to be one of the best perimeter defenders around. He consistently defended 94-feet tonight and came up with several steals both in one-on-one matchups and by playing the passing lanes. Very rarely do you find a guard like Sean, as he just might be as good of a defender as he is a playmaker, which is really saying something. 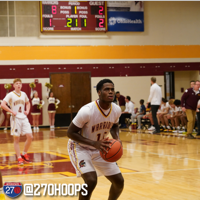 Charles Perkins (6’4 WF / Westerville North / 2020): Perkins was the best player all night for Westerville North as he scored a game-high 16 points and was impressive on both ends of the floor. The senior was extremely efficient finishing around the rim as he picked his spots well and used his body to create space in order to get a clean look inside. The 6-foot-4 forward has a thick build, broad shoulders and isn’t afraid to push guys around inside. He showed off a good post spin move and hit a fadeaway off the glass while being smothered in the post, showing off a good scoring package around the rim. We liked the way he finished through contact as well as he came up with a pair of and-ones on the night. Perkins also is a reliable defender on the interior as he has the discipline, strength and length to disrupt opponents shots inside. The senior makes the extra pass when needed, plays with great energy and rebounds well. He will be expected to produce in a big way for the Warriors every night this season. 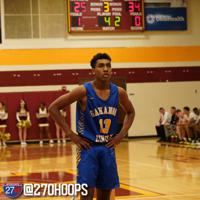 Jarious Jones (6’5 WF / Gahanna / 2021): Jones had a very impressive second half showing tonight. The junior was excellent finishing around the rim as he absorbed contact and used his length to get an efficient shot off consistently. He was really good off the bounce, getting to the rim a handful of times and making several nice reads when in the teeth of the defense. The 6-foot-5 wing had an impressive night on the defensive perimeter as well, wreaking havoc for opposing ball handlers with his combination of length and quickness. We liked how he stayed active in the passing lanes and trapping on that end as he created several easy buckets for his team in transition in the second half. Though we didn’t see it tonight, we know Jones can hit shots from the perimeter efficiently as well. The junior is a name to keep an eye on this season as he could attract some Division II interest if he continues to play like he did tonight. 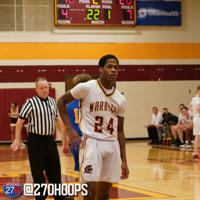 Chace Perkins (6’2 WG / Westerville North / 2020): Perkins was really impressive on the defensive end tonight as he held his own throughout the contest in a tough matchup with Sean Jones. The senior is a long 6-foot-2, moves his feet well and is a very disciplined defender. He played the passing lanes really well tonight as he deflected several passes and came up with a handful of big steals early on. Much like his brother, we really like the motor Chace plays with as he is constantly around the ball looking to make plays. He showed some offensive value finishing through contact and getting to the rim on a few occasions, though we think he could add a lot to the Warriors offense if he plays more aggressive on that end. We’re excited to track Chace this season as he plays the right way and is one of the better two-way guards in the OCC-Buckeye. 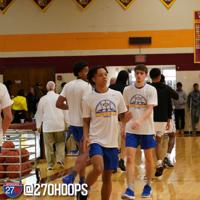 Phillip Pontious (6’0 G / Gahanna / 2020): Pontious was a big-time spark for the Lions off the bench tonight as he played very well on both ends. We were most impressed with the way he defended in the full court as he caused several turnovers with his active hands on that end of the floor. He also showed the ability to finish through contact when he came up with a tough and-one just before the end of the first quarter. We like what he brings to Gahanna off the bench as he makes the right passes, defends hard and can knock down shots. Expect the senior to have a big role for Gahanna throughout the rest of the season if he continues to bring the energy that he did tonight.