With Wisconsin behind him, Iverson setting sights toward professional career

Despite an early TBT exit, Khalil Iverson has a ton to look forward to 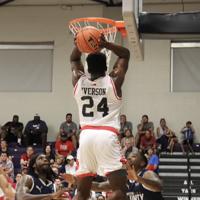 BEXLEY, Ohio -- While his debut in The Basketball Tournament lasted a mere 27 minutes and 44 seconds, Khalil Iverson's professional basketball life is just beginning.

A few months removed from wrapping up a four-year career at Wisconsin where Iverson paid his dues and worked his way into a permanent starting role, the Delaware Hayes alum is finding his footing as a soon-to-be professional.

"My agent is working on a contract in Poland and I got an offer to go play in Iceland," Iverson said of his professional status.

The NBA G League could also be in the picture for the uber athletic forward.

"The Pistons want me to go up to their G League and try out for the team," Iverson told 270 Hoops.

An under the radar high school prospect who didn't receive a single Division I offer until the summer before his senior year, Iverson has always been someone who has had to work his way up.

That was the case once again at Wisconsin, where Iverson went from a rather under-recruited freshman to a four-year contributor that left his mark on the Big Ten as one of the country's most entertaining athletes.

"I feel like each year I started to exert myself more," Iverson said of his career in Madison. "I'm usually not the one to go out and talk to people, but I found myself going out and having fun with my teammates."

A natural introvert, Iverson broke out of his shell in a big way in his last game on the road at Ohio State in a 73-67 overtime win in Columbus. In that game, Iverson was the best player on the floor, going for 22 points and 14 rebounds on 10-of-14 shooting in his final homecoming in his hometown.

"I felt like I was playing with a chip on my shoulder, like, I could have came here if I wanted to, but I would just rather bust y'all ass," Iverson said of that Ohio State performance.

While Ohio State rallied from a major second half deficit to force overtime, Iverson was intent on coming out of Value City Arena for the final time victorious.

"That had me on edge," Iverson said of the Buckeyes' rally. "When they came back in overtime, I was like 'I'm not losing this game.' And I had a whole bunch of people there. It was just fun to have a really good game against them."

Unfortunately for the high flying forward, Friday's return to Columbus didn't go as planned, as Kohl Blooded's Wisconsin alumni group fell in the first round of the TBT to Mid-American Unity, 80-71. Iverson was the best player on the floor at times, finishing with 17 points on 7-of-11 shooting off the bench. The 6-foot-5 forward showed off confident touch from the perimeter, hitting a three in the second half, but did most of his damage high above the rim.

With professional basketball on the horizon, Iverson is readying himself for the transition from college kid to grown pro.

"Stay healthy, stay in shape because a lot of the stuff is like, you're on your own now pretty much," Iverson said of what the move to pro basketball will entail. "You got to be the one to stay in the gym, lift, condition and make sure you're in tip top shape."

That process will also need to entail a diet change and a move to clean eating, something Iverson is still working on.

"You have to eat right," Iverson said. "I don't do that part yet but I'm getting there."

If pro basketball is anything like his high school and college career, Iverson will be the one to shine at the end of it all.

RT @JasonMorrow270: Shipping out four more orders today. Get your 270 Hoops gear before we run out! https://t.co/3aOkhwlGtn https://t.co/n…

RT @ZachFleer270: College coaches: The @270Hoops Ohio Challenge tips off NEXT TUESDAY AT 6 PM on YouTube DM me ASAP to get on the list of…

Get some 🔥 270 Hoops gear and help support small business in the process! https://t.co/hChcdYsV1E https://t.co/dlRkMu2YQi